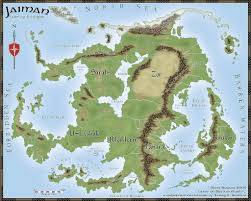 Welcome to my third review of the Loremaster Series; today we are going to explore what is possibly the most well known or popular of ICE modules: The Cloudlords of Tanara. Over the years there have been other reviews (see some links at the end) and Cloudlords has been treated to the Terry Amthor rewrite, but I’m going to focus on the original version and review it in the context of the Loremaster series and how it might have impacted the later Shadow World series.

Like the Iron Wind, the Cloudlords is undeniably “base DNA” of Shadow World where Vog Mur and Shade of the Sinking Plain felt like stand-a-alones. So despite some timeline issues and slight ret-conning, it’s easy to use Cloudlords as a canon SW book. In reality, most of the timeline and history issues are going to be lost on the players anyway!

First, let’s start with the cover art done by Gail Mcintosh. The Cloudlords is iconic cover art from the early golden era of RPG’s and is part of what I consider the “trifecta” of Gail’s early cover art that creates movement (everyone is wielding/swinging weapons) and depth (a contrast of foreground featuring the backside of a protaganist and a foe facing forward in the background). The trifecta: 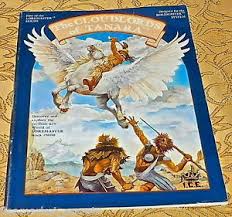 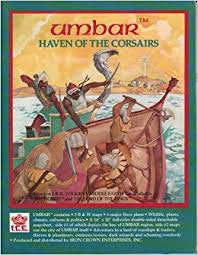 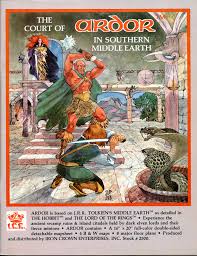 Some would argue that these covers were less refined than her subsequent work for MERP covers or Dragon magazin but I think they are fantastic and captured the unique nature of early Rolemaster compared to the other d20 settings.

Once you turn the cover page you are immediately drawn into a whole new RPG module environment: a color map of “The Forge of the  Lords of Essence”!!!  That map label alone raises all sorts of questions and promises that are delivered further into the book. This is definitely not the “Caves of Chaos“!

Since Terry Amthor was the author of this book, you’ll note that the Table of Contents follows a familiar structure that is adhered to in later SW books: World Info, Geography, Flora & Fauna Politics & Power, Key Places, Master Charts and then Adventures. For regular SW users, this is a well understood template that has mostly continued throughout the product line.

The Introduction covers the fundamentals of the Loremaster world, but it’s not currently named Kulthea yet. The Flows of Essence are discussed, but primarily as the source of “magic” and the basis for RM’s three realms. In 1.17 Peoples, the test describes the isolationism of various peoples and creatures due to mountain ranges and broad seas. In the next section, History, it describes: “…a strong north-south flow of that invisible yet dangerous force of Essence. These elements combine to make passage..virtually impossible”. The kernels of SW are there but haven’t been fully fleshed out with the Flows acting as physical barriers.

The History section is a simplified version of the SW timeline: the 1st Era, Kadena, The Second Age, Loremasters, the Wars of Dominion and finally the Third Age. What’s different? There is no mention of Andraax, the Althans haven’t been tied to an advanced technological culture and there is no mention of the Lords of Orhan. In fact, it was the Loremasters who broke their creed of non-involvement to tip the scales of the Wars of Dominion.

The next few pages are some map symbols and B&W geography maps–Fenlon of course. As a GM these Fenlon maps are priceless–in fact, it’s all I really need to run a game. The maps depict trails, roads, ruins, towns, waters, cave cities, burials etc.  Amazingly, Fenlon also incorporates elevations, foliage types, and settlement patterns of people and animals. It’s really an incredible resource in these books, and frustrating that this type of quality can’t be produced at a reasonable cost. ?

A page and half, covers basic terrain types, weather patterns, the calendar, hints at some moons and a sampling of creatures. Interestingly and in line with SW, there are very few monsters: Steardan, Garks, Demons & Undead are referenced. Under Demons, there is a reversal from the Iron Wind, ad the Pales are described as having 6 levels with the weakest being the First Pale. Here again, we can see world design shifting into place for the 1st Edition Master Atlas that came out in ’88-’89.

In a previous blog post, I discussed the Xiosians and part of my solution was based on this book.  The Cloudlords of Tanara are Zori  who crossed the mountains and discovered an ancient abandoned city with artifacts (the Cloudlord Gear) and the Steardan. They, like many historical cultures, co-opted the ancients legacy and became the Cloudlords. This section also covers the political powers of the Myri, Duranaki and Yinka and finally includes the Cult of Ezran.

The Cult of Ezran. Basically an outcast group of the Cloudlords was corrupted by a wandering Elf, a servant of the Unlife. Cloudlords makes no mention of the Priests Arnak, but it’s natural to ret-con Teleus as a Priest. Now an Undead, Teleus rides a “Demon-Horse” and wields the Implementor–an idea that probably morphed into the Heralds of the Night. To combat the Implementor, there are 3 very cool “swords”, the Narselkin. Give it to Terry, he comes up with the coolest magic items and these are no exception. Each has particular powers and meant for an Essence user, Fighter and Channeler.

Cool Places. The layouts and fortresses found in the Cloudlords are a step forward in the development of the “Lords of Essence” aesthetic. These buildings are clearly a fusion of classic marble style with industrial high tech features, radiant heat, locking doors and laen and shaalk panels. There are lots of odd rooms that are interesting but feel more like a standard dungeon “puzzle room” than a logical room in a fortress or structure. Other layouts include a Lords of Essence forge, a Duranaki hold, vaults for the Narselkin and the temple of the Yinka.

The last sections cover details on the Navigators–a more involved section than the paragraphs in the Iron Wind 3rd ed. Plus there is a glossary that makes for an interesting read and touches upon a lot of later SW content. Special metals and materials, languages etc.

Over all, the Cloudlords of Tanara is a fantastic supplement and takes the base DNA found in the Iron Wind and really morphs into the Shadow World style.  When compared to the canon established in the original Master Atlas, there just isn’t much change. Perhaps the most significant is the additional of the pantheons of the Lords of Orhan and the Dark Gods of Charon.

So why is it relevant? Clearly in design and layout it establishes all the later SW products and while it was re-written by Terry decades later the original Cloudlords of Tanara makes a great stand-alone setting or as part of your SW campaign.

Here  and HERE are some other reviews that I like coming from people more outside the Rolemaster bubble.