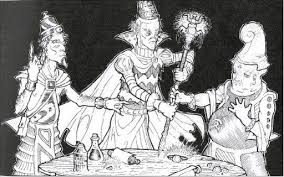 As we gather here, of primary importance is to answer this question: what is this “Viir”, as we now call it, this seeming essential force that permeates our planetary system?  Let us review.  It’s been almost 75 years since our orbital sensors first detected these energy emissions.  Tachyon detectors, plasma traps, electron screens and a variety of other particle shields all registered this force—all of them.  Is it all of these? Or is it something altogether new to our reality?

We are close to locating its source within our system—perhaps in the gravity well between the planet and its second moon.  What do we know?  It’s unclear if this energy is modifying and transmuting our physical laws or subsuming them.  The “Viir” seems to fundamentally change both ionic and covalent bonds for molecular and macromolecular structures.  In practice this energy field is also distorting chemical interactions and material structures most acutely—its effect on life forms and our planetary biome is still under analysis.

…Perhaps most perplexing and disconcerting is that the background level of the field seems to be growing….

…..We are now monitoring two dozen subjects that have exhibited unusual sensitivity to the Viir.  We have yet to isolate the specific epigenetic mechanism that allows for this, but our experiments lead us to believe that the subjects are increasing their sensitivity through time and effort.  It is our belief that sensitivity acts as a feedback loop, allowing these subjects to conversely manipulate these fields to some unknown effect.

Like every fantasy game setting, Kulthea is a world of magic, bathed in energy flows (Essaence) which provide the underpinnings for magical abilities. Unlike many other settings however, the Shadow World is also identified as being in our “known universe”, (the planet Ceril VII). This makes Kulthea somewhat unique: a fantasy setting within our real world with an aberration of the physical laws of existence. Of course this is a game, so a bit of hand waving can gloss over any logical discrepancies.

For those that play a cross-genre setting (other Sci-fi and fantasy) or want a consistent framework for the magical systems then some more details need to be considered. Over the years we’ve put together a framework during our own rewrite of Spell Law and for arbitrating Essaence effects during gameplay.

We’ve also posted up some basic rules for magic and technology on the RM Forums here.

The Essaence is a fifth energy along with the Strong Force, Weak Force, Electromagnetism and Gravity and interacts with and modifies our physical laws. Unlike these other forces which are normally produced or manipulated with technology (depending on technology level), the Essaence is also “bio-manipulative”; able to be controlled by living beings who have or developed sensitivities to this energy. Because this is a non-native energy, alien to the established physical rules of the universe, it interacts with the other forces in unusual ways.

Source. Where does the Essaence come from?

Per the MA, a rift was created by interdimensional travelers allowing energy to seep into the Kulthean system. But what does that mean? The Kulthean planetary system is moving through the galaxy—is the source a fixed point? If so, where? The Essaence gateway is a keystone between dimensions that allows the continual seep of Essaence. This object (asteroid) is at the Lagrange Point between Orhan and Kulthea—providing a continuous stream of energy to the planet and the moon. Depending on their orbital positions, the Essaence will also interact with other moons/planets. (Most notably Charon, Essaence power there will wane and wax. The Night of the Third Moon coincides with the greatest amount of Essaence energy reaching Charon.)

Apparently. A group of Ka’ta’viir left Kulthea in the 1st Era looking for other manifestations of the Essaence. (the Old Ones-who later came back in the Interregnum as the Earthwardens). This means that Essaence powers will not work outside the Essaence envelop around Kulthea, Orhan and on occasion the other satellites. However, unique Essaence imbued materials and alloys (Laen, Eog Ethloss etc) will retain their material qualities, (i.e. pure crystals that are fabricated in zero g).

The Essaence is a physical force but non-native to our plane of existence. On Kulthea this means it has changed reality on a quantum/physical level. We see two obvious effects. Chemical interactions and material changes. Both of these shoe-horn well into the established SW narrative. Chemical reactions and associated technologies are both rare and unreliable in SW. Also, Kulthea has a number of native “magical” /superior materials and alloys beyond normal material science. Changes to the established physical laws on Kulthea are the result of the Essaence interacting with the other 4 forces.

The Essaence was first discovered by a handful of sensitives and then explored by Althan scientists. Over the millennia, the Essaence has become fully immersed in the biology of SW. Humanoids, creatures and flora have absorbed this power, imbuing special natural abilities and/or the ability to willfully shape the Essaence into unique effects (spells). Now, almost all native flora and fauna have developed Essaence sensitivity to some extent, although the ability to manipulate it may take training.

Spell casters draw Essaence directly from their surroundings and into their “well”—through practice their ability to hold more power and draw it more quickly grows. The standard RM “Realms” are just different mechanisms to call upon the Essaence and manipulate the physical world. Therefore we don’t differentiate between energy sources by realm: multipliers, adders etc. are Essaence. There is no need for pools of PP’s for each specific realm, or averaging PP’s for hybrid users. Channelers provide their own power just like Essence or Mentalism, but the spell formation is drawn from their patron God.

Casters can tap into both Foci and Flows but there are dangers as well as benefits. Adventures taking place after the loss of the Northern Eye should see an increase in Essaence fluctuations, spell failures and other random effects of spell casting.