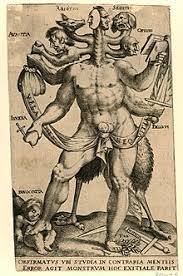 Since this is my last blog post for several weeks I thought I would write on a more general topic: Monsters. While “Monsters” are the mainstay of fantasy RPG’s, they were not entirely embraced by Rolemaster. Again, probably due to the influence of the generally monster-less Middle Earth and Pete Fenlon’s original campaign.

Even my earliest experiences with RM coming off of AD&D, I always appreciated the monster-lite approach that was in sharp contrast to the Gygaxian Naturalism found in the Monster Manual and Fiend Folio. The parade of fantastical creatures felt like an endless one-up manship that could never be slated.

Even Rolemaster’s “Creatures & Treasures” generally avoided the term monster and looking through it, there were very few truly bizarre creatures. The standard dragon/griffin/unicorn mythical tropes were all there but the homogenization process of monster creation was lacking. Shadow World introduced a few cool “monsters” (artificial creatures) but these were setting driven and fit into the conceptual world framework.

In the real world, “Monsters” are imaginary, fictional beings. What then would you call creatures that were as real and encounter-able as horses, giraffes or alligators? In a few recent Post, I discussed whether monsters should be treated like any other race or creature; those with intelligence should be considered a “Race” just as much as a human or Elf.

The larger issue of course is whether the term “Monster” becomes less an abstract idea then a defining rule mechanic. For instance, D&D created spells for summoning or controlling “Monsters” and spells for summoning or controlling “Animals”. Suddenly we have a delineating wall–a need to classify creatures as monsters or animals. A simplistic approach would be to define “Animals” as creatures that exist in our real world, while “Monsters” are fantasy creatures that exist in the rule books. Doesn’t that sort of feel like ‘breaking the fourth wall’ from a rule perspective? Another mechanism would be that Clerics/Druids can Summon/Control Animals while Mages can summon/control Monsters. Again, that feels quite arbitrary doesn’t it?

These are real questions I ask myself while I work on various spell list re-writes. Putting aside Gates/Summons/Calls, how does one define creatures in terms of spell mechanics. These rules should be flexible enough to address different settings (than Shadow World), different game styles, but still be strict enough to avoid vagueness or excessive rule lawyer-ing.

Since I think it’s impossible to delineate a creature from an animal from a monster in general rule set terms it requires more concrete attributes. Some possible game mechanic criteria:

I believe that the term “Monster” is just too arbitrary to be useful in game mechanics. Remember, that the “Monster” you just killed probably had a mother somewhere!!!

2 thoughts on “Rolemaster & Fantasy RPG’s. What are monsters really?”