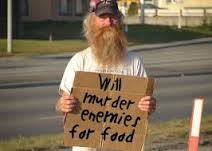 def. The typical protagonist of a fantasy role-playing game, who is a homeless guy who goes around killing people and taking their stuff.

Due to the holidays I only have time for a quick blog, but thought I would delve into this a bit–especially since Thanksgiving is really the “Last Supper” before we went all Murder Hobo on the native Americans!

A lot of GM’s pride themselves on running games that focus on other narrative elements than just combat; but let’s be honest, players love combat and Rolemaster’s critical charts makes combat more immersive and ultimately rewarding. RPG’s reward MurderHobo behavior! Video games have further reinforced this style. Digital games, limited in part by the defined experience and finite sandbox, also tend to focus on conflict and combat as the primary mechanism for player gains and advancement.

Despite mechanisms like “Alignments”, religious constraints and the good v. evil meme, many PC groups default to “kill whatever you encounter and take their stuff”. We certainly played like that when we were younger and in almost every game session since there has been at least one group member that opts for combat before anything else. In a game system that has terrible monsters, cruel creatures and real evil, their needs to be little rationalization: bad monsters should be killed!

I tend to a more grayscale approach to morality in gaming and Shadow World lends itself well to that. Most encounters are with other humanoids and while many of them may be selfish, greedy or dangerous they are probably not evil in the purest sense. Generally, people act in self-interest.

So while a GM can design an adventure that focuses on non-combat elements, that doesn’t mean the players will stay on script. So, how can you build some constraints into your gaming group?

Hey, I like combat as much as anyone but when you really think about it, the “murderhobo” concept defines PC’s. What are your thoughts?