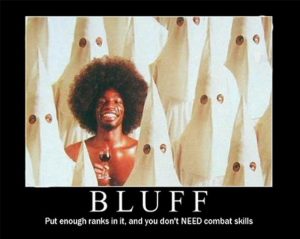 To continue with the subject of skill consolidation, I want to move on to our meta-skill “Social”. From a GM perspective social skills have always been a problem to me. Used as a blanket mechanism in the game the social skill roll can replace any real attempt at ‘role-playing’. But relying on pure role-playing can create tension between the player and GM (NPC) and force arbitrary game results.

RMU tackles a wide variety of social skills: persuasion, leadership, torture, interrogation etc. and once again I’m convinced that only 1 meta skill is really necessary here. This is the one skill that relies heavily (Ap/Ap/Pr) on the “Appearance” stat.

While persuasion could rely on innate charm, any salesperson knows that social skills can be learned and trained.  Our meta Social skill includes the ability to “read” people (lie detection), inspire them, charm them, haggle and negotiate as well as reading social normative cues through body language, posture, dress, deference etc. This includes the “skill as lore” aspect of understanding social customs and rituals.

Arguments against a single social skill is that it conflates negative social skills with positive ones. For example, a torturer would have high positive social skills along with the torture skill. This doesn’t fit the “professional meme” associated with a torturer. Keep in mind that psychopaths are most often have highly functional social skills, are manipulative and charming! I don’t see charisma as being the same as a developed social skill. A PC could have a very low presence and physical appearance and still be inspiring, convincing or manipulative. Likewise, the character with a high presence and appearance may be naive or socially inept.

As a GM, the social skill often provides an excuse to the player to rely on a skill roll rather than role playing–that can be an issue. However, when a random outcome is needed or I can quickly fill in 500 years of intricate social rules for a random society encountered by the players than the social skill works well.