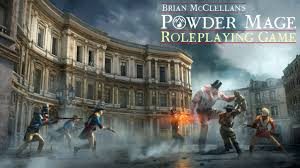 So, I’ve introduced gun powder to Shadow World. Part of this is based on hints that Terry has made in various SW products and the other is my integration of “Alchemy” into my rule set. I’ve already established that the Essaence affects covalent and ionic bonds (which explains magical materials) and Kulthea is not rich with reactive minerals.

Gun Powder is interesting, unpredictable, and not necessarily a game changer in a world with Elemental Magic, but technology is still progressing. I like the steampunk opportunities in Shadow World, and I like the “Musketeers” angle that can be created by combining simple guns with sword play.

As an ancillary example, someone brought up the “Powder Mage” books on the RM forums. I think you could easily model that world with Rolemaster, but you would have to create a ruleset around the “powder control” displayed in the book. Any of the Magician elemental lists are good templates: rather than controlling an element, you just create spells around detecting, sensing, controlling or buffing using gun powder. The book series also has regular mages—very powerful and would need their own powers or spell lists. Otherwise, in response to that forum post, the Powder Mage setting is easily modeled with RM rules.

Back to Shadow Word. We have ancient tech lasers and energy weapons, crystal power, steam energy, electric zap guns and everything in between. Why not introduce gun powder and guns as a unreliable, but occasionally potent technology? Shadow World Gun Slinger anyone?