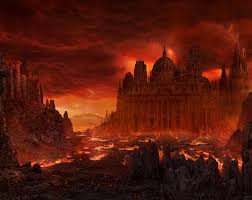 Due to a vacation it’s been a few weeks since out last session playtesting our “Legends of Shadow World” tourney series for 50th lvl characters. Last night the group reconvened for Chapter 4: “The Plains of Despair” (or alternatively The Fortress of the Dread Lord).

Narrative wise, it felt a bit broken; the PC’s got killed or beaten badly in Chapter 3 and the few weeks off disrupted the story line. However this is playtesting, so the group was brought back to life, I doled out some moderate damage, adjusted hits, PPs and item charges etc and sent them on their way through a Portal.

This one was tricky for me–while the main encounter is between the PC’s and a small group of powerful creatures there is also this “army” that the players could confront. How do you handle 5 PCs versus thousands of soldiers? Combat mechanics aside, the good news is that all those cool high level spells in Spell Law, the ones that affect 1 target/lvl or large AoE, come in REAL handy!

The PCs actual triumphed in this one, maybe a bit too easily. Unlike the others, this Chapter ends with a victory–the group retrieved the artifact they had been chasing. Now the players get to return home, get a break and then head out. Chapter 5 ties up all the threads and puts the group in direct confrontation with the mastermind behind it all.

Now that I have run 4 chapters I can start processing issues around high level adventures. This was one of the intents of this project. Some issues and questions I am hoping to resolve:

I’m collecting feedback from my other two playtest groups and hopefully have meaningful data I can post soon!

5 thoughts on “Legends of Shadow World Pt 4. The Plains of Despair.”