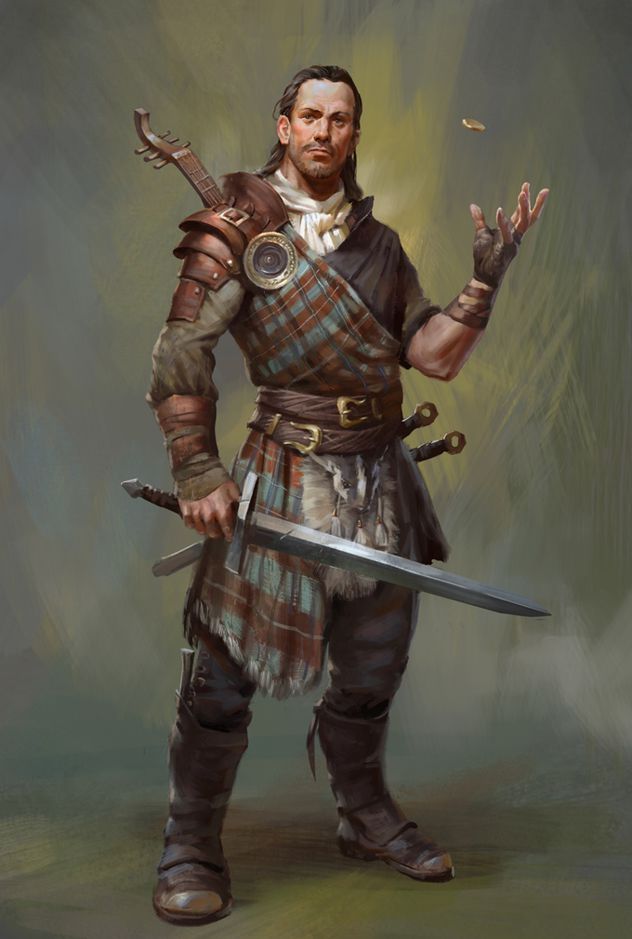 In response to Peter’s most recent discussion of the Bard, I offer this new Bard base spell list, Mockery. Although I designed Mockery for RMU, I believe you could use it for earlier editions. If you try to do that, I recommend changing any instances of the words ‘action point’ to a -25 modifier per point.

You should be able to find a Word file of the list in the Downloads>RMu section in the banner above. I have included both the original version and a new, less silly version for those of you who have no sense of humor 🙂 .

Why this new list? As I’ve noted recently on the ICE forums, I feel that some of the RMU semis (Bard, Dabbler, and Ranger especially) lack effective combat spells. This isn’t a problem unique to RMU: this is a problem RMU has inherited from previous editions. These classes have always had lots of utility spells, many of which are great; but my group is quite combat oriented, and in this department, these classes have few options, despite the fact that semis pay a lot of development points for their spells. I hope then to address the paucity of combat options by creating my own lists.

So what does the RMU Bard, specifically, need? Having just pregenerated a Bard character for my upcoming Gen Con sessions, I feel I now have a bit better handle on the class, both its strengths and its weaknesses. One weakness is that it isn’t very easy to make a combat Bard. In my opinion, a combat Bard needs more quick, low-level combat spells: some instantaneous ones that are minor debuffs (similar to the useful, instant-speed buffs other semis like the Paladin get); and some non-instantaneous spells that impose major debuffs or exercise battlefield control.

Being an Essence semi-spellcaster, the Bard needs these sorts of spells even more than Channeling or Mentalism semis in my estimation because the Bard has to develop Transcendence, at a cost of 4/6, in order to wear any armor at all (Channeling casters can wear up to heavy leather without Transcendence, and Mentalists can wear any armor except helmets). My level 2 Bard couldn’t even put on soft leather without it interfering with his spells. This makes for a very squishy caster, especially at low levels. Thus, the Bard needs some good, low-level combat spells – ideally debuff and control-oriented to fit with the class concept – in order to protect himself and make himself less of a liability in combat.

Please note that the spells on this new ‘Mockery’ list are not ‘songs’ that follow the rules for Bardic Songs in Spell Law 10.1. The Bard has two lists (Controlling Songs and Inspiring Songs) that follow these rules for songs, but that means they can be slow and clunky to set up. The spells on the Mockery list, on the other hand, just follow the normal spellcasting rules. I see the Mockery list in particular as the Bard’s backup plan, allowing her more combat utility, especially in cases when the party is surprised by hostile creatures.

Another thing to note is that some spells on the Mockery list have what I believe is my own new mechanic: they allow modifications to their RR based on the ranks the Bard has in a particular skill.  These modifications allow the Bard to use the ability she has developed in otherwise non-combat skills, such as Composition and Social Awareness, to enhance her spells, thus making these skills more useful in combat. This also makes for some interesting tactical choices. The Bard can for example choose between casting more powerful spells that are easier to resist (i.e. have no RR mod.), or less powerful spells that are harder to resist (i.e. have an RR mod.). The Bard can also choose between casting lower level spells with no RR mod., or higher level spells with a mod.

One last thing to consider as you read the spells on this list is that, while many of them are quite powerful control spells, they have one big downside: they are only effective on targets that have a language the Bard knows. Thus the Bard is especially good at controlling foes she can speak to, but much less effective against mindless undead, giant amoeba, etc. The Bard is also better at facing foes if she can spend some time researching who they are, and learning their language (which most Bards consider a very Bardic thing to do), or if she knows/learns spells on other lists that allow her to speak her target’s language. That is one important balancing factor for the list.

This is a rough draft, and I welcome all comments and criticism. I am especially interested in any comments relating to the power/balance of the different spells. I sometimes found it hard to judge what level a spell should be, given that I introduced another variable (RR mods for skill ranks) to the power equation.

I’d also like to give a shout out to JDale and Technobabble66, one of the developers of RMU and a poster on the ICE forums respectively, since they gave me some good ideas that I have incorporated into this list.

So, what do you think? Is this the Bard you’re looking for?

A Note on Hurin’s RMU Houserules: Thanks to Peter’s kindness, I now have a section of the blog devoted to my RMU houserules. Over the years, I’ve had quite a few requests from posters on the ICE boards to formalize my houserules so that they can use them. Over the coming months, I plan to use this section of the blog to do just that: to post for everyone’s use all of the rules I currently use, as well as all the ones I will make in the future.

Since this is my first time posting my houserules, and I’m still figuring out how to post documents and make them downloadable, I am also posting the spell list here. I don’t want to post all about the list and then not have you able to access it! So enjoy.

4. I Wouldn’t Do That – [RR mod.: -(caster’s ranks in Social: Influence: Duping)] Caster sings a cautionary little ditty, explaining the finer points of why trying that sounds like a very, very bad idea. Target suffers -50 to one skill of the caster’s choice.

5. Fyre of the Fae – Caster’s passionate scorn causes enemies in radius at the time of casting to glow bright red in embarassment, making them easier to see. The glow adds 10 OB to all attacks against them, and prevents the targets from benefitting from any concealment-type spells (e.g. invisibility, unseen, cloaking, shadow, blur, etc.).

6. Trip  –  [RR Mod.: -(caster’s ranks in Performance: Acting)] Caster warns target not to trip over an unseen imaginary deceased turtle. If the target moves more than 1’, it must roll an RR; failure means it falls prone and is stunned for two rounds. (Note the target only makes the RR if and when it moves).

7. Confusify – Caster’s willfully incoherent poem compells target to pause and ponder the fundamental principles of logic. Target is incapable of making decisions or initiating action; target may continue to fight current foes or in self-defense.

8. Stinkify – Caster calls attention to the unique body odour of one target in the radius. Target’s allies within the spell radius who fail their RR will not willingly move closer to the target, and must move at least their BMR away from target each turn of the spell’s effect, if they have an open path.

9. Major Mockery * – [RR Mod.: -(caster’s ranks in Composition: Writing)] Oh no, did the caster really just say that!?!? Target is red-faced and overcome with existential ennui, at -30 to all actions.

10. Sartorial Savagery – [RR Mod.: -(caster’s ranks in Social: Social Awareness)] Caster’s savage derision calls everyone’s attention to the target’s most questionable fashion choice. The target and all of the target’s allies within the radius who fail their RR suffer -30 Perception due to being unable to stop glancing at target. Affected allies also must spend 1 action point/round laughing uncontrollably at target’s apparel (or lack thereof).

11. Taunt – Caster’s incredibly annoying mime impression enrages target. Target must spend its next two rounds charging towards and attacking caster with full OB. If target’s path is completely blocked, target will attack anything and anyone in its way. Target can make a second RR, using SD stat bonus rather than Essence RR mod, to avoid striking allies; failure means target will use full but non-lethal force (eg: grappling/shoving) to get allies out of the way in order to continue charging.

12. Boogeyman – [RR mod.: -(caster’s ranks in Social: Influence: Intimidation)] Caster’s deep-throated shout of ‘I’m your boogeyman!’ strikes fear into all enemies in a 10’ radius. Targets suffer -15 to all actions and -30 to any fear-based RRs.

13. You Mock Me – Target is convinced that one of its allies (chosen randomly if any real allies are within sight; otherwise, an imaginary ‘friend’) is mocking the target behind its back. Target spends all action points for the turn moving towards and attacking this ally.

17. So Tiny * – Caster’s mocking couplet makes the target seem far less imposing, preventing the target from casting any Fear spell or spell effect, and negating any fear effects the target has already imposed within the area of effect.

18. Mass Taunt – As Taunt, but with expanded area of effect.

19. He’s Copying Me – Caster prevents target from casting any spells by mimicking the target and humming annoyingly when target tries to cast a spell.

20. Mass Stinkify – As Stinkify, but affecting all enemies in radius, who must move 2x BMR away from all other affected targets.

25. Mass Confusify – As confusify, except it affects all enemies within 20’ of caster, and targets may not attack caster for duration (even if they were already fighting caster).

30. You’ve All Been Served – [RR mod.: -(caster’s ranks in Performance: Music)] As You’ve Been Served, but with expanded area of effect, and targets must spend 4 AP/round dancing.

35. Ultimate Boogeyman – As Boogeyman, but with expanded area of effect and penalties: targets now suffer -30 to actions and -60 to fear RRs.

40. Seriously, Don’t Do That – [RR mod.: -(caster’s ranks in Social: Influence: Duping)] As I Really Wouldn’t Do That, except all targets in the radius are incapable of using the chosen skill (caster can only choose one skill total for all targets).

50. Lord Mockery – [RR Mod.: -(caster’s ranks in Composition: Writing)] Future Bards will tell the tale of the unrivalled epicness of this insult. Emotionally shattered, the targets are rendered catatonic in disbelief.

Note: Spell on this list only affect creatures that can understand complex (i.e. non-bestial) languages. The caster must have at least skill rank 2 in one language the target speaks.

Note: This is a silly list. Just go with it.

One thought on “Mockery: A New Bard Base List (RMU Houserules)”