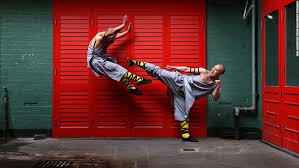 It’s no secret that Monks are my favorite profession. From the early days of AD&D to the later days of Rolemaster, when I have been a player it’s always been Caylis the Monk. As I have mentioned before, I like the independence of the Monk—a class that uniquely breaks the whole trope of the balanced party. Monks don’t need equipment (10’ pole, oil flasks or iron spikes), don’t need armor or weapons, have stealth, resistance to disease and poison and can hit as a magic weapon…WAIT…just had an AD&D flashback….

In Rolemaster there are no inherent class abilities, but…Warrior Monks have low cost of adrenal moves, adrenal defense, wear no armor and have unarmed combat ability. One of my favorite AD&D skills the Monk had: Slow Fall. This was duplicated as an Adrenal Skill in Rolemaster and still one of my favorites and allowed for great gameplay situations. Some would say that a simple levitation spell does the same thing but that’s more of a RM Monk thing than a non-spell user Warrior Monk.

So, a funny thing. In my efforts towards a level-less/classless system I greatly reduced the number of skills—basically corralling them into ‘meta-skills’ for parity and utility. (rather than unlimited parsing). Part of that process was removing ‘magical skills’—abilities that broke into the metaphysical realm, and this included the Slow Fall skill (which really makes no real sense) My changes nerfed some of the Monks skills—specifically Adrenal Defense which, while AWESOME, also made no sense. My solution—just allow normal parry allocation for martial artists. Rather than a physical parry of blade blocking blade, it’s assumed that martial arts provides a reactive defense against armed opponents including missile parry. This means that a martial artist will lose OB to increase DB like any RM combatant—where before they got the AD bonus at no cost to their OB. At the same time, we applied individual weapon modifiers and unarmed combat gets a MAJOR bump due to its low situational penalties: multiple attacks, multiple opponents, reverse, 180d etc.

In my rewrite of RM I probably hurt my favorite profession. That’s ok. Monks are still awesome and shouldn’t be given special spell-like abilities to enforce their character tropes. In my rules,

In my campaigns, Monks are still cool but certainly lack special powers granted in other game systems. Strangely enough, my work towards a level-less system was driven by the Changramai Monks of Shadow World. (and to the same degree Loremasters, and Navigators).

In our world, there are real Monks with amazing skills and tribulations. How about the  Marathon Monks of Mt. Hiei?

One thought on “Monks kick butt. Meta-physical or not.”