I had a need for a vampire for a Rolemaster adventure last week. So rather than going into Creatures and Treasures I went the the D&D 5e monsters.

Vampires appear just as they did in life, although their features are often hardened and feral, with the predatory look of wolves. Like liches, they often embrace finery and decadence and may assume the guise of nobility. Despite their human appearance, vampires can be easily recognized, for they cast no shadows and throw no reflections in mirrors. Vampires speak any languages they knew in life.

Skills General Perception +100, Stalk & Hide +45
Languages the languages it knew in life
Environment: Any
Organization: Solitary or pair
Vampire are undead creatures that come into being when vampires slay mortals. Vampires remain bound to their coffins and to the soil of their graves. Vampire appear much as they did in life, although their features are often hardened, with a predatory look.

Vampire use their inhuman strength when engaging mortals, hammering their foes with powerful blows and dashing them against rocks or walls. They also use their gaseous form and flight abilities to strike where opponents are most vulnerable. Shapechanger. If the vampire isn’t in sunlight or running water, it can use its action to polymorph into a Tiny bat or a Medium cloud of mist, or back into its true form.

While in bat form, the vampire can’t speak, its walking and flying speeds are the same as a normal bat. Its statistics, other than its size and speed, are unchanged. Anything it is wearing transforms with it, but nothing it is carrying does. It reverts to its true form if it dies.
While in mist form, the vampire can’t take any actions, speak, or manipulate objects. It is weightless, has a flying speed of 20 feet, can hover, and can enter a hostile creature’s space and stop there. In addition, if air can pass through a space, the mist can do so without squeezing, and it can’t pass through water. It gains +25 on all Strength, Constitution and Agility resistance rolls, and it is immune to all non magical damage, except the damage it takes from sunlight.
Legendary Resistance (3/Day). If the vampire fails a resistance roll, it can choose to succeed instead.
Misty Escape. When it drops to 0 hits outside its resting place, the vampire transforms into a cloud of mist (as in the Shapechanger trait) instead of falling unconscious, provided that it isn’t in sunlight or running water. If it can’t transform, it is destroyed. While it has 0 hits in mist form, it can’t revert to its vampire form, and it must reach its resting place within 2 hours or be destroyed. Once in its resting place, it reverts to its vampire form. It is then paralyzed until it regains at least 1 hit. After spending 1 hour in its resting place with 0 hits, it regains 1 hit.
Regeneration. The vampire regains 20 hits at the start of each round if it has at least 1 hit and isn’t in sunlight or running water. If the vampire takes fire or electrical damage or damage from holy
water, this trait doesn’t function at the start of the vampire’s next round.
Spider Climb. The vampire can climb difficult surfaces, including upside down on ceilings, as if it had the Monk spell Ceiling Walking (Monk’s Bridge 20th Level).

Multiattack (Vampire Form Only). The vampire makes two attacks, only one of which can be a bite attack.
Unarmed Strike (Vampire Form Only). +155 OB martial arts rank 4 OR a Medium Grapple
Bite (Bat or Vampire Form Only).Tiny Bite (bat form) or Small Bite (vampire form) +136OB, one willing creature, or a creature that is grappled by the vampire, incapacitated, or restrained. Takes an automatic D piece critical (to the neck). The Vampire regains #hits points equal to the total bleeding damage taken by the victim. A humanoid slain in this way and then buried in the ground rises the following night as a vampire spawn under the vampire’s control. Charm. The vampire has Spirit Mastery to its level and 1PP per level plus any additional power points from items carried. This is used to charm and subdue victims.
Children of the Night (1/Day). The vampire knows the Animist base list Animal Mastery to its level but the effects only work on Rats, Bats and Wolves. 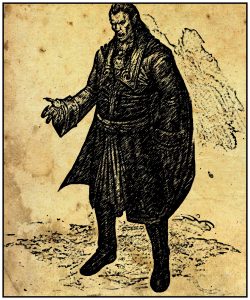