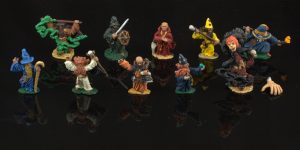 I got a couple emails on my last blog regarding Shamans so I thought I would expand the conversation to include “Magic-Users”.

First off, my over-arching point about Shamans is an extension of my discussions on Clerics and Priests in general. The Rolemaster Cleric is really just the Channeling archetype; there are numerous variations that could be treated as “sub-classes” or unique Professions (like Shamans or Animists). Herein lies a systemic problem with Rolemaster–what determines whether a class idea needs a whole new profession with base lists and individual skill costs or whether it can just be a variation of skill selection using an established profession? Why have an Animist/Druid and not the Shaman? Why should there be a “Barbarian” profession and not a “Mercenary”?

The same could be said for Essence users–why is there just a “Magician” and an “Illusionist”? To fit into the D&D system? Instead, let’s flip our viewpoint–there are just Pure Essence Users, but their title (professional name) is dependent on the class or type of spells they master. Since I’ve expanded the elemental lists with BASiL, there are now enough spell lists for each elemental type that there at least half a dozen Magician types. Add in a few other tropes and the Essence Caster can be expanded just like the Channeling Caster.

Here are some templates that I use in my SW campaign:

“Elementalist”. This a broad term for a Mage that has mastered one or more of the Elements: Wind, Water, Earth, Cold, Fire, Light, Dark. Depending on that focus they may have a more specific professional name: FireMage, Windlord, Earthcaster, Dark Magician, Light Wizard etc. (In our campaign, “Elementalist” is the moniker for a Mage who masters 3 or more Elements and an Archmage is a caster who masters 3 or more “realms”).

“Aspected Mage”. This is Mage whose core powers are focused on an aspect or discipline: “Sound”, “Defense”, “Dimensions”, “Necromancy”, “Magic”, “Demonology”–really the sky is the limit. Generally I like to have at least 3 similar spell  lists to define an Aspect or Focus; otherwise I’ll just throw the list into open or closed. Obviously, I stick to BASiL, but with the various Companions including Elemental Companion, Guild Companions and user generated lists, you can put together a HUGE list of possible Mage focuses.

This process creates very diverse but specific Mage types; each with their own strengths and weaknesses. Peter has discussed rolling Channeling into Essence–doing that would greatly expand the various Mage disciplines: you could have “Healing”, “Creations”, “Weather”, “Flora and/or Fauna” aspects for Mages along with the traditional elements and other standard RM Essence lists.

Now, imagine if you will your players encountering their opponent: a Mage surrounded by his minions for the final battle. They know the Mage is an Essence user…but what else? Now it’s not just a binary choice between a Magician and an Illusionist. Do they buff themselves against heat? cold? electricity? What if the Mage has mastered the Shield Law spells (BASiL). He would be able to buff his followers and himself from Elemental attacks, spells and missile and melee damage to a great extant. That’s a whole different tactical situation than what the PCs may be use too!

By simply broadening the spell lists and grouping them thematically, you can create dozens of distinct Mage types. This is not the same as allowing players to cherry pick the very best lists for their BASE. This doesn’t ‘break’ the game but adds a tremendous variety to it.

9 thoughts on “Rolemaster Profession Review: The Many Flavors of Magic-Users.”