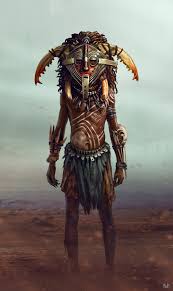 The original Rolemaster probably ignored a few key class tropes in their original work. Paladins comes to mind of course, but in my mind one of the most important is the  Shaman!

If Clerics/Priests are defined as members of an organized religion, than perhaps we can define a Shaman as a leader of a decentralized or non-organized religion.  Maybe the society or group worships a local god, or a real god under an avatistic identity, but the belief system lacks the more coherent structure and trappings of an organized religious institution. If you are gaming in a “classic” fantasy setting, you’ll probably have, or encounter a variety of primitive societies: Orcs, Goblins, barbaric tribes etc.  These groups will most definitely have  a version of a “Cleric”, but different than the type found in Rolemaster that casts Absolutions and Channels.

A Shaman can make a great foe or adversary for the PC’s. They can have a interesting mixture of spells that give them offensive and defensive capabilities, and they could even be designed as a Hybrid caster to allow them access to Essence or Mentalism. This can keep the players on their toes if they are expecting the Shaman to use the “same old” Cleric Base lists!

The Shaman’s spell lists should be defined by the particulars of the culture. A Orc Shaman should have different spell lists than the Shaman of a barbaric jungle people. The Rolemaster Companion offered up “totems” and “animal spirit” lists for the Shaman, but I find that too culturally defining while creating clunky spell mechanics. What’s probably required is to create a number of different Shaman types whose spells reflect the needs and belief system of the culture.

Here are a few ideas or templates from Shaman that I’ve used in my SW campaign:

Kuriis Truthsayers act as tribal guides, healers and priests and stay loosely united through their ability to communicate with one another over long distances.These people worship “Shral”, which is a hybrid of Shaal and Ulya Sheck (the ostensible Empress of the region).

Profession: Using RM I would classify them as either Pure with some flexibility on lists or Hybrid using Channeling & Mentalism.

Vakshs Rune Priestesses. The Vakshs are cannabilistic Eritera living in the Jungles of Chaal-Chu. They have powerful Priestesses that use Rune Magic: magical tattoos embedded all over their bodies.

Base Lists: All of the Priestesses magic is derived from permanent tattoos inscribed into their skin. They have a mixture of Evil Cleric and Evil Mentalism plus access to the Demonic Gate & Mastery spells plus some contingent powers in their Runes:

Shaman Warrior. These Shaman can be used in primitive martial tribes/cultures: Lugroki, Goblins, Barbarians etc. They have competent spell-casting ability but are also combat effective.

Base Spell Lists: If the culture follows the Unlife or Dark Gods, they’ll have some aspected list or Demon Gate/Mastery. Other ideas:

Those are just 3 ideas for creating more interesting “Shamans” in your game world. Of course, our house rules allow much more flexibility in character creation and mixing spell lists, but GM’s shouldn’t be afraid to mix and match lists to make the Shaman fit the culture. Channelers especially should have some variety as their Gods can and should provide the spell ability!

For more primitive cultures that lack formal educational systems, Shaman may be the only significant spellcasters in those societies–they should have a mixture of lists that provide best for their people and reflect the environment and belief systems.  Shaman with a creative mix of capabilities can be great opponents for you group–or interesting PC’s!!

7 thoughts on “Rolemaster Profession Review: taking another look at the Shaman.”