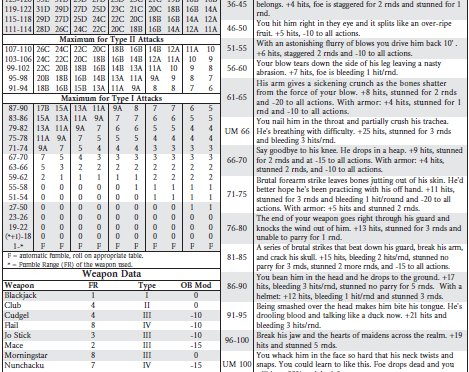 Do you give your players a copy of their combat chart for rolling their own attack?

I know lots of people do this but I am not one of them. I believe the objective is to speed up combat. Everyone has one copy of every chart they use so there is no page flipping back and forth through Arms Law. The GM only then has to manage the NPCs attacks.

I do something similar with Spell Law so everyone has a copy of their spell lists so the spell casters are not queuing up to get their hands on spell law to see what spell to cast.

I think combat tables are different. Here is my thinking.

Now imagine this. The players had discussed their plan. They were going to take out any patrols on the castle wall, dumping the bodies over the wall into the marshy ground beside the moat.

The players attack a knight with surprise, from behind. They make their roll, add their OB and I then have to tell them the knights AT and DB.

The knight has a DB of 90! Yes, that is right a DB not dependent on shields or being aware of the attack. Telling that to the player is certain to raise an eyebrow at least. Do you honestly think that the characters are still going to throw the knight, armour and all over the wall and into the moat?

Or how about the poor knight is wearing cursed armour? It looks like AT17 but protects as AT2. What will the players think then?

I think giving the combat table to the players, for me, is giving away too many spoilers. Those situations do not come up every day or every session but they do come up.

I have ‘cured’ my players from excessive meta gaming. We had a situation where all the players fell into a detailed and somewhat heated discussion about their plans while they were in easy earshot of an informer. There was no possible way for the characters to share the information that the players were sharing without vocalising it so I rolled a perception roll for the informer and he heard it all. Several crimes were part of their plans and one of the bad guys was the local sheriff. Things got hot for the characters pretty quickly and one of the players said that his character would never have said all that out loud in the middle of the market. The obvious answer was to ask well how did you think the characters were having this discussion? Other players were still interacting with people in the market while the discussion was going on. I was still describing the evolving scene as more stalls opened and more towns folk filtered into the market and so on.

From that point on the players all accepted that all their communications are their characters communications unless they have explicitly said they are passing a note or using some kind of magical method.

Bandying around the foes AT and DB to me seems to be too much information to be giving the players. I think it has the potential to change the characters tactical thinking based upon things the character simply cannot know. If there are two enemy in from of you and you don’t have a very good OB, you are going to pick the one with a poor DB, it is simple self preservation surely?