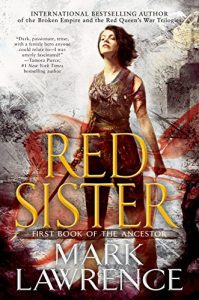 This is not a book review…I recently started reading a great book, Red Sister by Mark Lawrence. Mark is the author of 2 other series: The Broken Empire and the Red Queens War. Like his other series, Red Sister takes place in a fantasy world with a lost high tech heritage—a bit like Shadow World!

When I’m reading a new fantasy series with a magic system I try to figure out if the portrayed system can be based on Spell Law/Rolemaster or if there are any cool spell ideas I can incorporate into Project BASiL. Having read quite a bit, I can say that many of favorite spells and lists were inspired by fantasy fiction.

Red Sister offers up several ideas that feed into recent discussion and posts here on Rolemasterblog. First is the idea that setting drives the rules and second, that Channeling could be rolled into Esssence (or eliminate realms entirely).

Of particular note in the book (no spoilers)

Races. The population was descended from 4 races. One that had great size and strength; one that had incredible speed, one that could tap into lesser magics and one that could tap greater magics. While this is a common trope, sometimes I do miss more differentiation between the races in RM and SW. Barring some stat bonuses (whose impact are minimized at higher levels) most races are defined by physical characterization than special abilities or extremes of nature.

Religion. The story focuses on a convent, one that trains young women in the esoteric arts. Holy Sisters, the most common are focused on maintaining the faith. Grey Sisters focus on stealth and poisons and have a talent for “Shadow Work” (mentalism?). Mystic Sisters manipulate threads (magic) and Red Sisters excel on armed and unarmed combat (warrior monks). What I like, and what’s been discussed here on this blog, is the idea of “agnostic magic”—magic defined by aspect, focus or effect rather than Essence, Mentalism and Channeling. Religions and churches train in magic and have access to this special knowledge, but magic use isn’t tied to or dependent on a diety.

So far it’s been a good read. If you like “Monk” stories I would also recommend Witches Blood.

Any books you’ve read that could fit the Rolemaster/Spell Law system?