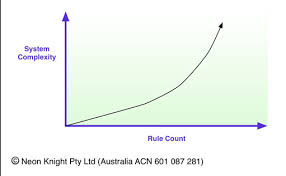 “Rules for rules”. To me one of the biggest drivers of system complexity and bloat is “rules for rules” ie—new mechanisms to modify original rules or to make  work-arounds to disliked rule restrictions.

Let’s use “Transcend Armor” as a perfect example. Why do we have “TA” as a skill? Because the addition of Paladins and other new professions in RM Companions required a mechanism for Channelers to cast spells. Why? Because the common trope of Paladins is that they are armored knights that cast clerical style spells. The solution? A new skill and a whole bunch of arbitrary new rules so Channelers (or Essence casters) could safely cast spells while wearing metal armor. Let’s ignore the fact that many fundamental rules that we don’t question are really just a result of acceptance to early D&D standards. Why is there a restriction on armor? Because in D&D magic users weren’t allowed to wear armor. Period.

Rather than add complexity to the system, why not question the original restriction in D&D on casting in metal armor to begin with? No reason except for “balance” and to reinforce class distinctions and class roles within a group. Sure, there is a hand-waving, quick reasoning that armor interferes with spell-casting and within the relatively simplistic rule set of early D&D that works. But in D&D, clerics would wear metal armor…so why not in RM?

Here’s a solution. GM’s, just remove any penalties or restrictions on Channelers wearing metal armor. Does that create a “balance” issue? Why would it? It certainly avoids a slew of issues, rule parameters and discussions about “Transcend Armor” and simplified things for new players.

The larger issue here is generating a whole slew of new rules and mechanisms to eliminate parts of RM that you don’t agree with, or want to work around. It’s a bit dishonest and many times the driving force behind rule changes or suggestions seem to come from players and not GMs. Some of the forum posts feel very much like players “working the ref”. You don’t need RMU developers or RM to canonize a rule so you can feel good—if you want Channelers to cast in armor just ignore armor penalties for Channelers.

What other types of changes were wanted that required new, additional rules? Players didn’t like 3 round casting (it’s more fun to cast every round) so ESF rules were introduced. Then more flexibility was required so “Grace” was added to offset various casting issues. Rules, skills and complexity layered over the original foundation that are completely unnecessary.

Is all this really necessary? Could the original rules just have been tweaked without the extra complications?

3 thoughts on “Rolemaster Rant of the Day: Rule Bloat & Complexity”