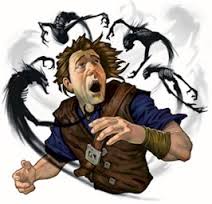 Perhaps more than any other spell, and dating back to AD&D, Illusions have been misused, misunderstood and abused. Some have argued that Illusionists, if played “correctly”, are the most powerful spellcasters in RPGs. That assertion relies on two bedrock principles: creativity of the player and an expansive interpretation of the limits of the spell.

The principle of illusory magic is a bedrock in myth–deployed by trickster gods, Djinn and clever mages in ancient tales and modern pop culture. At first glance the idea of magical mirages is simple, useful and restrained in effect. Unfortunately, AD&D forever changed and corrupted illusions to the delight of rule-lawyers everywhere. For me, it got the point where I didn’t allow Illusionist Base Spells until I could get around to fixing them. What was the mechanic that screwed up illusions? The mechanic of “believing creates reality” first found in Phantasmal Force, a 1st level illusionist spell.

“When this spell is cast, the magic-user creates a visual illusion which will affect all believing creatures which view the Phantasmal Force, even to the extent of suffering damage from phantasmal missiles or from falling into an illusory pit full of sharp spikes” (emphasis mine)

The concept that visual illusions can cause real damage is both revolutionary and game breaking. Like many things D&D, this promotion of Illusion effects has been mainlined into other game systems and now an accepted trope. We can never know the original intent of the “believing” rule–perhaps without a physical component, illusions would be weak and easily ignored? Maybe D&D saw some mental aspects to illusions that created a placebo effect on the unwitting? “Believing” as a game rule is always tricky. Sure, some players can dive into it and roleplay it well, but having a group where some of the characters believe and others don’t can take the players out of the game quickly.

But the more fundamental question is should Illusions have a physical force/touch component to it to begin with? What’s wrong with just having a visual illusion spell that doesn’t have a “touch” or “believe and it will harm you” mechanic? I can think of many, many uses in gameplay. Sure, upon close inspection a foe can determine that a visual effect is an illusion, but that doesn’t minimize it’s potency in many gaming situations.

Spell Law attempted to rationalize this through the “touch” process–giving illusions a physical impact to reinforce the spells authenticity. The Rolemaster Touch spell was a level 2 spell that could be added to other illusion effects. (while working on this post a discussion popped up on the RM Forums HERE).

While D&D mixes many magic types into their spells, Rolemaster’s realms maybe best suited to utilize differing types of illusions into it’s framework. Glamours, phantasms, illusions, mirages, facades etc are all used to describe some type of illusion spell. It might be helpful to create a framework for these words that tie them to certain phenomena or attributes, but for now let’s keep it basic: An illusion is a false sensory stimuli produced by a magical effect. Whether it’s a visual scene, smell, sound or perhaps even a touch, the spells efficacy is dependent on the target. A blind person cannot be affected by a visual illusion, and a deaf person cannot be affected by a sound illusion.

Rolemaster has two realms that work well with illusion, but both should work quite different from a mechanics standpoint. I’m not happy with Spell Law RAW–so like all the other spells, I tore them down and then built up from scratch. To me it’s clear that illusions will work quite differently with each realm.

The realm of elemental powers and physical manipulation, Essence, and more specifically “Light Law” or light manipulation seems a natural fit for visual Illusions. It’s harder to rationalize including physical effects, smell or sound into a “Light Law” spell list though. Sound illusion can fit into a “Sound/sonic Law”, physical effects could fit into “Telekinesis” and smell could be a utility list. Of course, consolidating into a single “Illusions” list with various aspects (sight, sounds, smell, touch) works but requires casting multiple spells to generate a multi-faceted effect. Nonetheless, I don’t see the Essence realm creating illusions that will cause damage if a target “believes”. Instead, Essence illusions are physical manifestations–a hologram or sound machine.

Mentalism, however, opens up a wide range of possibilities. Under our rules (and I think RMU went this route as well) Mentalism illusions are “internal”–a false sense implanted into the target, or targets, mind(s). This allows Mentalism a more flexible and powerful Illusion ability. Unlike Essence though, these Illusions will only be experienced by the target(s). To me this a good balance between Essence and Mentalism spells. Essence allows for manifestations, that are seen by anyone but are limited in scope while Mentalism can be fully immersive but only by select targets. This mental projection also gives the Mentalist the ability to affect the targets nervous system, i.e. pain receptors. This gives Mentalist the ability to incorporate “damage” (via pain penalties and not real damage) in the spell effect.

In my opinion, it’s Mentalist Illusions that best mirror the functions of the D&D Phantasm spell, while Essence emulates the presentation of the Phantasm spell. Rolemasters realm differentiation allow for more precise form/function execution.

These are my solutions. But to revisit the topic: are RAW Rolemaster Illusion spells broken? Should a caster be allowed to add “touch” effects to a bridge illusion so characters can cross a chasm? Does this even make sense? Is an illusion, a false sensory input, compatible with a touch; an actual real directed spell that creates a physical effect? Combining the two break the rules.