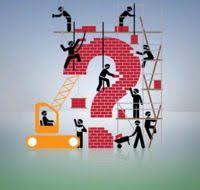 If you follow the Rolemaster threads or the RMU threads you’ll see people  asking for clarification on a certain spell, list or spell mechanic. With so many spells, various realms and lots of companion spell lists, it’s not surprising that the Spell Law edifice is showing a few cracks after 30+ years. For me that started the process of “deconstruction”–tearing down Spell Law and looking at it from a unbiased and objective mindset.

Examining RM from an outside perspective is hard, especially after playing it for almost 35 years. Us older players perceive Rolemaster through “incrementalism”: a slow gradual process of accepting new rules, add-ons, discussions and analysis that occurred over decades. Rolemaster now is the result of layering new rules onto older accepted ones–even if the original rules don’t stand up to new scrutiny or are not needed since RM has transitioned past its role as a D&D bolt on.

Every time I sit down and work on spell lists, I discover some new issue, opportunity or conflict that I want to tackle to rebuild my spell system to something newer, better and more consistent. I have 5 rough spell law “issue groups” that I have pinned to my work space for easy reference. These are:

I use these to test spells and lists. What Realm should they be assigned? How does the spell work? Is it structurally consistent? What is the casting mechanism? Does it work using Rolemaster rules or does it require a one-off rule?

What are some examples of “broken” spells? (this is just my opinion!)

Bladeturn. Few spells garner as much discussion as the Bladeturn spells. But rather than contort mechanics to make the spell actually work in the game, how about we examine the spell fundamentals. Here are a few issues:

Solutions. I have come up with my own in BASiL, but a couple of quick ideas: incorporate Bladeturn/Deflect spells into the Essence Hand list where they belong; change its mechanistic underpinning. For instance, call it “Slow Blade” so it works within the context of a “flurry of blows”.

How about Charm, Sleep and the whole Spirit Mastery list? I’ve commented on this before, but if you look through the Essence lists there are few, if any, other lists that work on the “spirit”, “conscious” or “mind” of a target. Does this list even belong in Essence? Of course the answer is that D&D established the principle that Magic-Users were to have Charm and Sleep spell, and so too Rolemaster.

How about Lofty Bridge? Does Leave/Jump/Teleport work on the same principles as Flying, Landing or Leaping? Again, half the spells work as “gating/teleporting”, while the other through telekinetic or motive energy. While they are arguably both types of “transportation” spells,  it seems illogical to have a spell list comprised of spells using very different mechanics.

What about spells that give bonuses to skills or actions? How does this work mechanically? Combat is a compound action–a confluence of skill (ranks), natural ability (stats) and other modifiers. What is this spell affecting? Does the spell guide the hand that holds the sword? Does it make the sword sharper? The swordsmen’s strength higher? Their agility improves? Any one of these could be a good mechanic, but aren’t explained. Why make spells that require so much hand-waving when Rolemaster is a system that rewards realism?

A few other ideas to improve Spell Law:

So interestingly, while I like how Peter approaches spell development, I think it would be difficult to encapsulate into a rules system–it’s too loose. However, Peter’s system is basically how I write new spell lists!

Once you start deconstructing and re-examining Spell Law, areas of improvement are both numerous and fairly obvious. But in the end, few people have the time or energy to fiddle around and make large revisions to Spell Law.