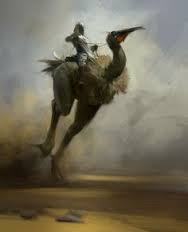 Want another reason to adopt Shadow World for you game setting? How about cool creatures to ride! From the early genesis of Shadow World in the “Court of Ardor” and the Loremaster series, fantastic mounts have been an integral part of the setting. Other game settings include the usual cool mounts: Dragons, Pegasus, Hippogriffs etc, but tying unusual creatures with distinct cultures and organizations has been a mainstay of Shadow World. Here are just a few samples from various books:

The Iron Wind. The special militia of the Udahir are the Thyfuriak; young men and women who bond with the Thyfur, a giant bird of prey. These warriors undergo specialized training and lead a monastic life of solitude in defense of their people.

Cloudlords of Tanara: Perhaps one of the best known groups are the Clourdlords. These knights, clad in gleaming armor of gold and silver fly their noble Steardan (winged horses) and wield rods of Sunfire against their enemies.

The Messengers of the Iron Wind. Both Lyak and Athimurl ride special mounts: Great Birds and Large Cats respectively.

The Golden Eye. The riders of the Order of the Golden Eye are formed into four divisions, each with it’s own special mount. Depending on which you encounter the Rider could be mounted on a Climbing Wyvern, Fire Wolf, Land Wyvern or Winged Wyvern.

The Kuluku. The mysterious people of the jungles in SE Emer have domesticated giant Dragonfly’s for pets and steeds!

Heralds of the Night. These fearsome servants of the Unlife are mounted on demonic, black unicorns.

Uthula: Large lizards that can grow up to 20’ in length.

Kith: Who can forget Kith; the 6-legged panthers and famed for being the companion of the Loremaster Vurkanen Tyes!

Pfurgh: These ostrich like birds can carry a rider at considerable speeds over open ground.

As a GM I love to introduce mounted foes and SW allows more interesting variants than the usual warhorse. I’m not averse to PC’s with the right background having a unique mount. Most of these mounts are limited in carrying capacity, work only in certain environments and require care and maintenance often not found in towns and villages. Plus the PC will need to expend some effort in riding skill. So while it adds a great character element I haven’t found it to be “unbalancing”.

For inspiration on interesting mounts from works of fiction I would recommend:

“The Emperor’s Blades” by Brian Staveley. The story features Valyn, an elite soldier of the “Kettral”—gigantic black hawks. Very reminiscent of the Thyfuriak although Kettral actually can carry a whole squad of soldiers. The series also has a unique take on monks.

The Malazan series by Steven Erickson. One of my all time favorite series and a triumph of world-building and fantasy trope subversion. The world includes the culture of the Moranth. While “human” they are always encountered encased in chitinous armor and riding their enormous flying insects the Quorl. The Moranth are famous for developing “munitions” which we incorporated into our SW alchemy rules. The Malazan world is covered by 20 books by 2 authors. There is an extensive Wiki that would be a great model for SW.