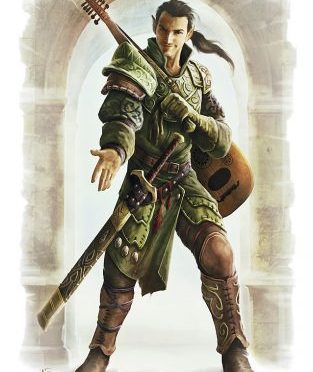 The Bard is one of the nicest semi spell user professions in Rolemaster. It has a nice combination of magic, stealth, combat and social skills to make them really useful in all situations. Obviously there is no one profession that can do it all without any restrictions or everyone would choose it and no one would play anything else. The bard profession is not like that, it is nicely balanced whilst at the same time capable.

The D&D bard is often quoted as the Leader Profession and the Rolemaster bard also fits into that niche quite nicely. In fact leaving all game mechanics and rules aside the cultural role of the bard means that doors open to them at all levels of society and their access to ‘behind closed doors’ information is unparalelled. In fantasy culture bards are the bearers of news as well as entertainers. They are welcome in lordly halls but get to eat with the servants and so on. As a leader the bard has the social skills to inspire and motivate groups and instill morale.

So what makes the (Rolemaster) bard so good? The first element has to be their magic. The Bardic base spells fall into two camps, magic relating to songs and magic relating to knowledge. Their songs give them the equivelant of charms, sleep and fear type spells and as they progress in levels they can effect more targets and at greater ranges. Their knowledge based spells influence how they learn languages by doubling or more the rate that skills are learned for the same points cost. They can also magically assess mundane and magical items. The ability to learn skills more cheaply and to magically emulate ‘lore’ type skills gives the bard the option to devote more development points to other areas of character development.

Bards are not restricted to just their base lists though. They can also learn the 1st to 10th level open Mentalism lists. These include self healing, illusions, detections, invisibility type spells, a variety of defensive spells and even a bolt style attacking magic (shock bolt). The truely great thing about the realm of mentalism is that magic can be cast whilst wearing any armour all baring helmets.

So magically they are really good all rounders. The only thing they cannot really do is movement, no flying or teleporting. This great flexibility is tempered by the fact that spells are expensive to learn for bards so they have to pick what is important to them.

Skills-wise the bard the bard gets professional bonuses in just about everything except directed spells (spells such as shock bolt and lightening bolt) and body development (hitpoints). The bard only has one directed spell in their entire repetoire and that is only if they choose to learn the open list of Brilliance so this no real disadvantage.

The Bard’s primary skill costs are pretty generic with nothing too expensive but nothing being particularly cheap iether. The primary skills are things like weapons skills, spell lists, magical skills, climbing, swimming and so on. the core of what an adenturer would need to do. The Bard has about the most expensive magical skills of all the spell using professions but that is the balancing fact with having the best possible mix of spells and being able to use them in nearly full armour.

It is in the secondary skills that bards really start to shine! All of the social skills from acting and singing to public speaking and seduction are all coming in at just a single development point for the first rank and most secondary skills right across the board are only 2DPs for the first rank each level. Remember that higher level bards can use their magic to learn languages at upto five times the regular rate means that spending a single development point could get you two to five ranks in language.

All RPGs have some element of combat in them. The bard as an all rounder is never going to be a stand out warrior. They are somewhat restricted in that their first weapon skill is affordable but it all gets very expensive after that. If you are restricted to just a single weapon then that generally suggests spear, shortsword or hand axe as your weapons of choice. It really depends on the game and setting as to which one I would go for. In my opinion the spear is the best weapon in the game in terms of flexibility being similar to staff, club, polearms and the lance. It can also be thrown giving a ranged option. They are also a lowest common denminator weapon requiring very little metal manufacture so are widely available. If you are washed up on a beach you can find a big stick and use half your spear skill with it as a big club. If you are a swordsman you are unlikely to find one of them on he beach.

You cannot chop down a tree with a spear in a hurry. If your game is a bit more out in the wilderness then the hand axe comes into its own. It is a practical tool as well as a weapon. It can be thrown to give you a ranged attack and it is similar to short sword for when nothing but a sword will do. I you are in a hack and slash type game then you can learn it left and right handed and two weapon combo to give you two attacks a round. Bards can be pretty good at adrenal moves so combine Adr. Speed with a pair of axes and you are up to four attacks a round or two attacks with axe and shield.

The third option is the shortsword. Again it works well as a two weapon combo, it is throwable and of these weapons it is the most consealable. It is also similar to all the most common longer blades such as broad and long sword and smaller weapons such as daggers, dirks, sais and all the short axes.

All of these options give you a range of weapons you can turn your hand to in a pinch all using just the one weapon skill.

Armour-wise chain is the best option. You do not need much skill to get away with the lighter chain armours, the heavier ones give good protection and cost wise it is certainly affordable. I would probably get fully trained int he first fiew levels and then turn those development points over to more spell lists as soon as you are fully trained.

So there is the bard. They are the smooth talking all rounder and leader of men who can in theory at least do everything from hurling magical bolts, slay dragons and play the wise old sage, all in a single profession. That is not bad going.