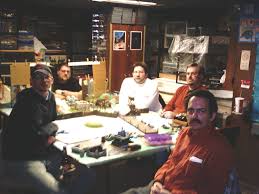 For those that feel like table-top RPG’s are a stagnant market or that there is no growth opportunity for ICE, RM or Shadow World I would point out two facts:

There are three basic ways to grow sales: acquire new customers (grow the game community), convert competitor’s customers or sell/upsell to your existing customers. Many would argue that growth in new table top players is stagnant, lost to new media and video games. But growth is occurring and RM and SW have a place in that market. Converting gamers to RM and SW is a bit easier—RM started as a modular “bolt on” product to D&D and SW has never really been stat intensive and can and has been used with a variety of gaming systems. Selling more product to current customers is the fall-back approach; what we call “low hanging fruit”. Publish a new product or revision and you’ll get a certain percentage of existing customers that will buy it—baked-in sales.

There is certainly opinions and criticisms of each of these approaches. Some argue that RMU won’t bring in new gamers; that ICE needs a simple introductory rule set. Others feel ICE just needs to push out more products in general. If there was one right answer, or if business strategy was that definitive than everyone would be a millionaire! The truth is that all three channels need to be explored and I think that ICE is doing a fairly good job given its organizational footprint and resources to bear.

There are new tools for small or emerging companies: social media, organic growth strategies, guerilla marketing etc. Putting those aside, there is one essential strategy for growing a customer base: from the ground up: “boots on the ground”. RM and SW need to be introduced locally, whenever possible. Gaming nights at the local library, game store or youth center. Tournament modules at gaming conventions etc. Other industries use “sponsorships”; this might be worth exploring. Having GM starter packs, online private forums and other tools to encourage local GM’s to adopt ICE games and use them locally builds a customer base. Reimbursing GM’s for travel and hotel costs at GENCON might pay itself off quite well.

Let’s look at another industry that has some similarities: rapid adoption, youth client base, local growth. I used to be heavily involved in the paintball industry. The sport grew rapidly in the 2000’s: tournaments were televised nationally, fields opened up everywhere, there were at least 8 glossy magazines dedicated to the sport and equipment companies had robust sponsorships for teams and local retail stores. Over time, the equipment manufacturers started their own retail websites and sold directly to their customer base. Once they captured direct sales and the associated retail margins they became less motivated to spend money on local sponsorship and player development. They became direct competitors of the local stores. While the economic crash was a contributing factor, since the late 2000’s the industry has shrunk by 80%. Yes, part of the issue was the wholesale/retail strategy of the manufacturers, but a larger part was a slower and more insidious feedback loop: there is no place to play paintball.  Store retail sales suffered, which reduced player development, field investments and local marketing. Because of this, fewer players participated in paintball and store sales suffered further. Local paintball businesses closed and there were less options to play and thus less players. Overall a self-fulfilling downward spiral.

What are the analogs to the gaming industry? Local development can be an effective strategy to growing a customer base. I don’t think RGP’s will see the same boom that we experienced in the early 80’s BUT…aging gamers are teaching their kids to play and creating a new generation of RPGers. It’s a slower process that requires a broader strategy than a top-down advertising or point of sale effort. Supporting gaming conventions, creating a GM starter pack, reimbursing experienced GM’s to attend every con possible, creating a “game ambassadorships” for targeted cities/regions—these are low cost strategies to build the game base. Growing the local gaming community grows the base, which then grows company sales. A virtuous feed-back loop.

7 thoughts on “Thoughts on growing the RM and SW gaming community.”