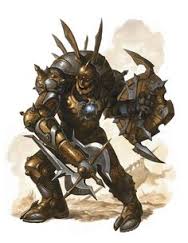 You slowly open your eyes, paint stabbing through your head and your body aching from head to toe. Gradually, your surroundings come into focus. Above, a smooth stone roof dripping cold water. Moving your head cautiously you realize you are in a small stone room blocked by rusting narrow bars. You are not alone. Other bedraggled figures are likewise laying on the floor. All appear to be bruised, their clothes in tatters and are moving feebly taking in their surroundings.

In the distance you hear the squeal of hinges, a heavy door scraping against the floor and metal clanging on metal. Footsteps approach, methodical and clad in metal boots. You and your fellow prisoners manage to sit upright and await your captor. From around the corner a metal horror appears glinting in the flickering torch light. A towering armored figure is revealed, adorned in full plate covered in razor edges down the greaves and vambraces. Instead of hands, the ends arms end in weapons: on the right a circular cutting blade and on the left a 3 pronged stabbing tip.

Your mind is frantic…what is this figure? A man, a creature or something else? You look around, realization dawning that none of these other people are familiar to you. In shock you can’t recall how you arrived here. You have no recollection of the past…or who you are….

This is the player introduction for one of my first RM games (pre-Shadow World, mid 80’s). The players find themselves in a bare cell with no memories. They don’t know their past, how they got there, their skills or even their professions. I’ve run this 4-5 times over the year as both a short “tournament style” adventure and as the start to longer campaigns.

Besides designing pre-gen characters (which can change some of the adventure obstacles and challenges) the adventure can be quickly set-up. No need for backgrounds, history or even gear! It can organically evolve into a longer campaign and allows the GM to adapt player backgrounds as the narrative unfolds.

This works well if you want your players to gradually immerse themselves into the larger SW plots but prefer to keep it simple at the start. The memory loss can be later attributed to Andraax, Lorgalis or another important NPC.

This adventure was also the start of my journey towards a “no profession” game. What I realized is that my players didn’t fall into GAAP (Generally Accepted Adventuring Practices—that’s an accounting joke btw) because they didn’t even know what profession they were playing. There was a novelty and newness to their behaviors that was more akin to a player’s first roleplaying experience than a seasoned RPG’er. As the players attempted various actions they were able to recover some of their abilities. Even then it wasn’t obvious what the profession was. Their actions were driven by the narrative and not their abilities or group assigned roles.

Anyway, as an interesting start to your SW campaign or as a stand-alone adventure for a game day it’s a great hook.

2 thoughts on “Shadow World Game Hook: The Lair of Ozymandias”