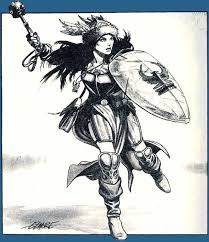 If you read this blog consistently you are probably aware that both Peter and I are proponents of a “No Profession” game. But the truth is that a having “No Professions” generally means that most players end up designing a character that conforms to a common fantasy trope anyway. Whether that’s because players are guided by long held biases and profession models or that a balanced design forces players into basis archetypes (at least non, pure or semi) a no profession system almost always results in customized but identifiable classes without the need for “one-off” rules, talents, quirks or similar work-arounds. (For more thoughts on this check out my blog “No Professions Equals All Profession”.)

Many, many RM’ers love having lots of professions, but many of the Companion professions are only slight variations on the 1-2 dozen standards used. I’ve read lengthy argument about tiny variations in individual skills costs to justify the differentiation, but let’s be honest—do you really need different professions for a Knight, Barbarian, Duelist or Warrior? They are all just fighters aren’t they? A barbarian is just a fighter that wears less armor!!! That differentiation could best be done with equipment choices.

However, if you like the endless variations in professions than let’s talk about Channelers, and more specifically Clerics. RM paints a very broad brush with Clerics; they basically have the same vanilla powers set in DnD: protection, healing, creation and resurrection. Blah!!! Channeling Companion went a long way in addressing the need for differentiation in Clerical powers based on their specific Diety and added several new professions as well. In my view, the choice of God makes each pantheons clerics a unique profession. In fact, I see Animists/Druids as an extension of this viewpoint—they are Channelers of a “nature god”. Why Animists/Druids are singled out as a profession when Clerics of the God of Fire, or Lightning, or Trickery should be equally as valid makes little sense—unless you are stuck in the common profession tropes of DnD and standard RPGS.

We play in Shadow World which as a very specific set of Gods. It’s common sense that a Priest’s training (spells and skills) will reflect the nature of their patron. Isn’t this the very definition of RM Professions? A “Battle-Priest of Z’taar” should be VERY different than a Cleric of Eissa. In our SW campaign, Clerics of differing religions rarely share the same spells—unlike RM RAW where most Clerics will have all the same Open, Closed and Base lists.

Because we designed our Shadow World Clerics with very specific spells and skills they basically create whole new professions. A quick look at a few of our Shadow World “Clerics” with basic tagline descriptions (you need an RM Forum membership to see or download the files):

Under RAW RM, these should all be “Clerics” but as you can see they really are a variety of other professions or new professions. (The RM Professions noted are really just approximations).  Does a player even need to be a “Cleric” to be a high servant of their God? Some of these could be considered Semi-Spell Users under normal RM rules. We don’t worry about it and I have the flexibility of coming up with any creative ideas for a NPC, organization or group without worrying about which profession it can or can’t be. Likewise my players can create any PC they want without being limited by an arbitrary profession system.

However, if you have Professions shouldn’t the Clerics of varying gods be given the same consideration as Fighter or Mage variations?