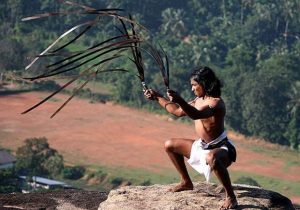 I was doing some research and looking for ideas for a interesting cultural weapon and came across the Urumi. Functionally it’s a steel whip–deadly to opponents and deadly to use for the wielder!

Using RM weapon tables, the whip table makes the most sense with only slash criticals. To differentiate even more, I can devise weapon specific performance using our “Weapon Modifier Chart“.

urumi-wielders learn to follow and control the momentum of the blade with each swing, thus techniques include spins and agile maneuvres.[2] These long-reaching spins make the weapon particularly well-suited to fighting against multiple opponents 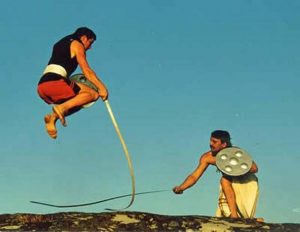 The benefit of our optional rules for weapon stats is that it allows for  customization and differentiation beyond their efficacy against AT’s and their hit & crit thresholds on the attack chart. RMU established fixed penalties for several combat maneuvers (reverse strike, dual attack, protect etc) when it should be the particular weapon that decides that penalty. Shouldn’t unarmed combat have a lower multiple attack penalty than a warhammer?

Anyway, the Urumi would have a low multiple attack/opponent, flank and rear attack penalty but have a VERY HIGH fumble range and no real ability to parry.

When not in use, the urumi is worn coiled around the waist like a belt 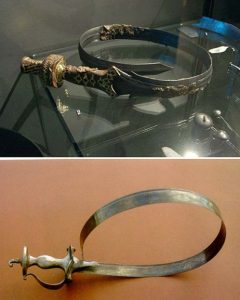 I have a few cultures or groups where this would be a great weapon: the Daughters of Inis and a special group utilized by the Alliance in Agyra.

I’m sure if I looked the Urumi is probably already included in Combat Companion or some other past publication, but I don’t have those so it struck me as very cool!