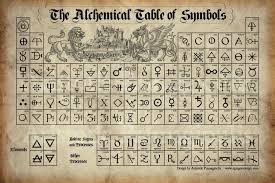 So yesterday I blogged about a simple, unified system for imbedding magic into objects: what we term “Enchanting”. I also noted at the end, and linked to a RM Forum blog about a separate, but related system of Alchemy.

Curiously, most of the original RM Alchemist material had little to do with our common definition of “Alchemy”. Sure, Alchemists could make potions, but most of the spells related to the creation of runes, magic weapons and armor and Daily “X” items.

Anyway, after I posted my blog, I got a message asking for clarification about the differences between Alchemy, Crafting and Imbedding. So first to be clearer, these three disciplines are “Three Legs of the Stool” in creating magic items.

Alchemy is Chemistry—just in a fantasy world. The art is dependent on Formulas, either researched, experimented, bought or given.  In my RM Forum post, I focused more on mundane creations: fireworks, gun powder, glues, acids, smoke grenades etc. However, it’s easy to add any and all formulas that allow for spell like effects or special powers. (Hurin, I think you brought this up in a blog comment or in the Forums). I never bothered devising specific magical formulas, but it has been done by other game systems, video games and works of fiction. Really the sky is the limit, but a lot will depend on the game setting. The newest Anthony Ryan book, the Draconis Memoria is based on the idea that distilled Dragons Blood gives special powers to the imbiber based on the type of Dragon.

It’s not that I don’t embrace the idea of magical compounds produced by Alchemy, it’s just that I haven’t got around to it yet! Shadow World offers a variety if interesting creatures and materials (and already has magical plants which is basically a narrow branch of Alchemy). Dragons and Shards probably have a lot of organic parts that could be used to make interesting compounds!

So, besides the “Third Leg of the Stool” analogy, Alchemy does several things:

In any event, Alchemy acts as an important “meta skill” in our Rolemaster/Shadow World game. Maybe this gives you an idea for yours!