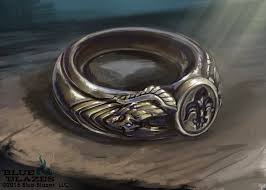 Although I wanted to slow my blogging pace down for the summer to focus on other projects it’s a hard habit to break! I want to spend less time on house rules; the RM Forums provides plenty of opportunity for rule minutia, and I think most of the active readers here already have their own set positions. So I’m introducing “Short Takes”, a minimized discussion for rule theory where I can offer conceptually ideas without getting into the weeds with my own solutions.  If you look over some recent posts, I’ve already started with this approach. By offering a rule theory in more vague terms, I’ve found that people respond more with their own ideas that I can adopt to fine tune my solution. That’s been the case for “Stats as Skills”, “Resistance Rolls”, “Fixed HPs” and a few others.

For my first “Short Take”, I wanted to tackle the subject of Item Imbedding. I believe that Rolemaster was one of the first rule sets to tackle a comprehensive system of magic item creation, and while no one in our group ever played an Alchemist we loved to look through those Base lists and play around with making cool items.

While they were a leap forward in the early 80s, a lot has changed over the past few decades. Reviewing the Alchemists lists for BASiL made me realize how inadequate the lists are now. At the very least, they should just be reclassified as Closed lists, but that doesn’t solve the problem of the lists themselves or working in issues with other realms.

The spell lists that I have the biggest issues with are: Inorganic Skills, Liquid/Gas Skills & Organic Skills. These spell effects should be handled with regular RM skills, and by establishing these lists, it infers that spell users are needed to produce certain items and materials. Take the Udahir of the Iron Wind—they have a Laen Crafters Guild but under RM rules the members would need to be 20th lvl to work the material. So either the Guild has an abnormal number of 20th lvl Alchemists or there must be another process to work Laen. Later rules did a bit of hand-waving, offered up ritual magic or other reasons to explain cultures like the Udahir (or Dwarven crafter societies), but ultimately RM established a very high benchmark to work materials that were ubiquitous in the game world: mithril, laen eog etc.

It seemed obvious to me that de-coupling Crafting processes from Enchanting processes (a better word than Alchemy in my mind) was the first step. This allows for societies with high technical competence to make items without the need for Alchemy spells and puts more importance on crafting as a skill in general.

Of course, eliminating those 3 Alchemly lists only leaves 3 Base: Enchanting Ways, Essence Imbedding and Ment/Cham Imbedding. The last two are basically the same so in the end you are left with 2 basic lists to handle RM magic item creation. Let’s put that aside for now (I’ll discuss in another blog re: BASiL Investiture Spells).

So now that we recognize that Crafting is used to work materials, magic and non-magic, how does that tie into imbedding magic? We decided to unify imbedding, crafting & item breakage into 1 mechanic: Item Strength.

Here is the basic chart I posted on the Forums last year. We’ve done some improvements and changes to it since.

Meta-physically, this directly ties together a material’s physical strength (fragility), susceptibility (resistance) and its magical capacity (# of spell levels). So, a glass object is fragile, unsuitable for magical imbedding and resistance to holding lots of spells. This means that for someone wanted to enchant/imbedding glass will either need to use a very low-level spell or be a powerful spell caster that can overcome the materials limitations. Conversely, strong items (like Laen) are both easy to Imbed and can hold lots of spell levels, but are difficult to craft.

This also simplified item crafting—the Item Strength number can be used either as an Item Level or a SM maneuver penalty depending on our own resolution process. For example, a crafter wants to make a sword of High Steel (Str 50). The crafting skill check roll would be made using a -50 (Sheer Folly), the sword could conceivably hold up to 50 lvl of spells and if an Enchanter wants to imbed a spell or power the item would save as 50th lvl to accept the spell. (Note that this is a bit counterintuitive–the material making the save would ACCEPT the imbed).

Occasionally there is an outlier (a strong material that is also magic resistant like Kregora, or a fragile material that holds magic well)—but it’s easy to track a few outliers than come up with a more complex system.

These guidelines also mean that potent magic items are going to be made with strong, high quality materials while those made with lesser materials will be weaker, used 1 time or disposable (potions, charms, wards, candles, powders, oil, ointments etc).

Hmm…I’m not sure this turned out to be a “Short Take”! A couple notes: