Next weekend I will be running my next face to face game session. I have read over the game notes and the adventure module. I have just decided that the main trap/puzzle that the players have to solve I don’t like.

Lots of these old D&D modules have magical traps and puzzles in them which seemed fine when I was 14years old but now when I look at them I just don’t like them. Dare I say they are a bit silly? So I need to come up with my own replacement puzzle (in this case it performs as a lock to get deeper into a magicians tomb) that I feel comfortable with and gives a more serious tone to the adventure.

For this I think I want to construct something based around an astrolabe. I thought I was on a winner and being original until I did a Google images search and the top results were all for the Game of Thrones astrolabe. I read the books a few years ago and the idea must have stuck. What I did discover was that an astrolabe was not actually what I was looking for. What I was imagining was actually an Orrery. 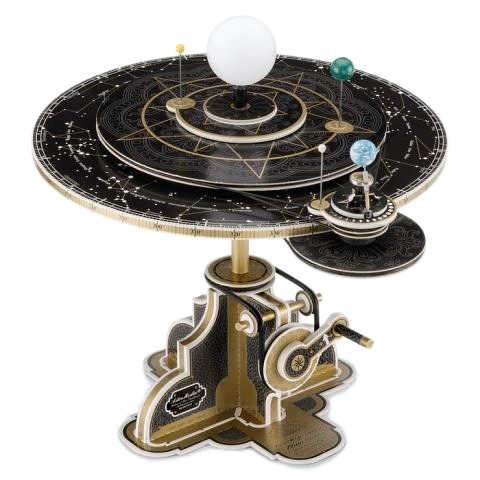 Now, an Orrery is a great basis for a puzzle and seeing as the dead dude in the story was actually an alchemist the creation of a magical orrery is entirely consistant with the story and the world.

I am intentionally not giving my players any permenant magical items at the moment just scrolls, potions and single use items. One reason being that in a previous campaign I played in the game became completely overshadowed by the magic items the characters carried. To some extent it became that we were playing the equipment list not the characters. The other reason is that single use items force the characters to make choices. The item is used now or later but it cannot be used both ways. The only items that have are healing, the most powerful of which is a scroll of life giving, a single use bring a dead character back option. I like that one because it gives me the option of killing a character and knowing that it wil not be final.

Anyway back to the Alchemist’s tomb. I cannot tell you the actually trap/puzzle I intend to use as I am sure my players read the blog. What I have said here is not a spoiler for them as they have already know to expect something and its size and positioning will tell them exctly what it is when they see it.

Going right back to the beginning I have noticed now that in every D&D module I have converted over to Rolemaster I have removed either traps I think are immature or monsters that I simply cannot believe could have evolved or anyone would have created. The very first of which was the Gelatinous Cube. In the first game I ran for my players when they came upon a trap their first reaction was that “Oh this is a D&D adventure it wil be filled with silly traps.” It also brought out anecdotes about dungeons that had been ‘abandoned for centuries’ with corridors filled with locked doors behind which were two hobgoblins. How did they get there? Who fed them for the past 200 years? What were they waiting for? Needless to say I very quickly scanned through the adventure for any such room or other silly traps and I didn’t find any, thankfully.

Assuming we all started roleplaying with D&D back in the 70s and 80s we must have been much more accepting then or is it that I am now much more intolerant?