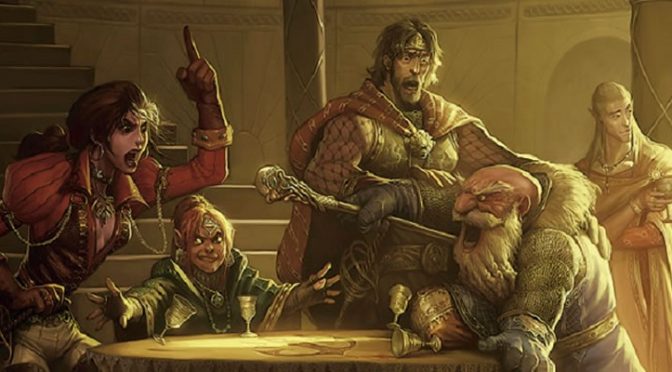 Investigative scenarios often bog down into speculative debate between players about what could be happening. Many things can be happening, but only one thing is. If more than one possible explanation ties together the clues you have so far, you need more clues.

Whenever you get stuck, get out and gather more information.

So that comes directly from the Gumshoe rules I am reading. My players frequently bog down into endless circular speculation. Not always about clues but maybe the best way to attack a fortified position, or how to try and sneak past a guard and so on. It is almost like they want the ‘perfect’ plan but either have insufficient information for making that plan or it simply doesn’t exist.

Whether it is about investigations and clues, planning an attack or escaping from a goblin hold it is really good advice for players to ‘get out there and do something!’ As a GM if the players turn inward and debate about things between themselves there is little that us as GMs can do about it. It doesn’t move the story on. If you get out there and interact with the world then we can give the players the clues they need, or the way into the castle or whatever.

Let’s face it, as GMs we want the characters to solve the mystery, defeat the bad guys or escape certain death as that is what their story is made of and that makes the game fun for everyone. They may not escape every time and it shouldn’t be easy or there is no sense of achievement or reward but likewise doing nothing but talking in circles also brings no sense of achievement or reward.

In the last game session I upset my players as their characters were in the middle of a market, I was describing the traders and the folk hanging about, including a secret police spy trying to get close to them when the players started a massive debate about what they were going to do next including sharing all sorts of information that only the individual characters would know. I did mention that people were taking an interest but the players were so engrossed they mostly missed it. When the bad guy turned out to be completely au fait with their plans they got very upset but I pointed out that they had discussed them at length in public they were adamant that they would never have done that if they had realised people could over hear them. I do not like meta gaming, it is cheating which ever way you look at it but the point is the debate achieved nothing as they were none the wiser at the end of it than they were at the start. RPGs are mostly an action game as in ‘action movies’ and if you do not act then the story does not progress.

Anyway, I thought that was a good bit of player advice so I thought I would share it.