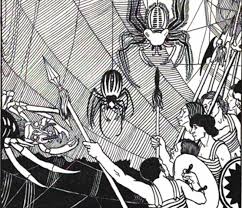 One of the obstacles in creating high quality RPG supplements is access or affordability of quality artwork. Consignment artists may be too pricey for a small publisher or individual and clip art may not give your product the polish that you’d like to create. Some publishers revert to using “open domain” art–oftentimes older art no longer protected by copyright.

During a recent search for cool, older artwork I came across some sketches by JB Clark. At first I thought this was fairly recent artwork, but incredibly, much of it is dated to the 1890’s! JB collaborated with William Strang and together they illustrated the Adventures of Baron Munchausen, Ali Baba and Sinbad. Of course these were all fantasy/fantastic adventures and their illustrations captured that classic fantasy feel we often call OSR art style. JB is particular compelling and did some great illustrations for translations of some writings of Lucian of Samosata.  One of Lucians more known works is True Story. This was meant to be a tongue and cheek work of science fiction and fantasy. It deals with outer space, interplanetary lifeforms and interplanetary warfare! Not bad imagination for a writer in c. 150 AD! Reading through it I realized it would make a crazy and highly stylized fantasy campaign. 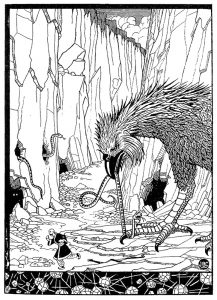 I find this art so similar to the pen/pencil line art common in early RPGs. They feature “action” or “movement”, the characters are often armed and it features strange, fantastic creatures. 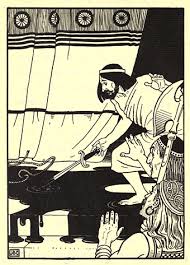 Check out the art above…is the top figure reaching for a sword stuck in blood? Is he prodding the liquid? It looks like the other two figures are calling to him to stop!  This feels like an image out of an old D&D module doesn’t it?

How about the picture below. A ship is in the background and it looks like the crew has disturbed a Roc nest! 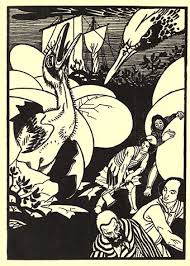 Here is one more–pretty self-explanatory! 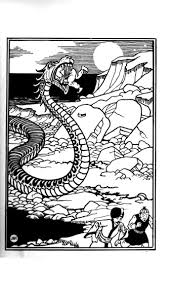 Do you know of any older artwork from the 19th century or earlier that would work in modern fantasy RPGs?

2 thoughts on “The compelling fantasy art of JB Clark.”