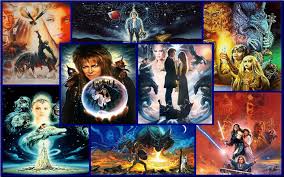 This week I’ll be turning 48! If you are following this POST on the RM forum, my age seems fairly typical of other Rolemaster players. We grew up in the 80’s, played RPG’s, and waited hopelessly for movies (and TV) to embrace our passion for fantasy roleplaying. Yes, there was Excalibur, Ladyhawke, Conan, Willow, and the Beastmaster; but most weren’t great and were considered “B” movies. There was a long gestating D&D movie that never happened (until the Jeremy Irons fiasco in the 2000’s), but otherwise fantasy fans were really left wanting. A lot has changed since then.

Let’s give credit where it’s due. The Lord of the Rings trilogy not only mainstreamed fantasy for the masses, it paved the way for HBO’s Game of Thrones and opened the door for a host of new fantasy and scifi movies and shows. This on top of a dozens of comic book shows and movies and a steady diet of great SciFi movies. We are living in the golden age of fantasy and science fiction!!!

Many writers, actors and directors in tv and movies are or were roleplayers. There childhood and background not only influences their style, but directs the types of projects greenlit for production. Right now, nerds rule the world–and we are better for it!

So not only do I have a birthday, but a few days later, I’m going to see a movie that I’ve waited 35 years for: Bladerunner 2049. This December we have a new Star Wars movies coming out!! On TV we have The Expanse, The Handmaidens Tale, The Man in the High Castle and Game of Thrones. What other shows or movies do we have to look forward to in the near future? Here are just a few:

It might have taken 35 years, but what a time it is. How about a Shadow World movie! What fantasy or Sci-fi are you looking forward to in the coming years?

5 thoughts on “80’s redux. An embarrassment of fantasy riches.”