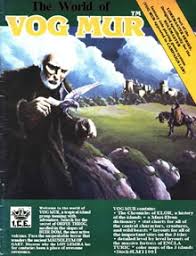 For a long time, The World of Vog Mur was never my favorite Loremaster book (although still better than Shade of the Sinking Plain)! I recall talking with John Ruemmler on the phone back in 1988 or so and mentioned my “lack of enthusiasm” for Vog Mur. There was a long, awkward pause, and John said “I was the author for that….”. Oops, foot in mouth! Over time, though, I’ve grown to appreciate it–sort of the “Empire Strikes Back” effect. It’s a bit awkward but charming in it’s mixture of Rolemaster, Middle Earth elements and basic D&D. And there are great ideas and layouts that makes using the module as a drop-in side adventure easy. Shipwreck the players?

Vog Mur is a short supplement, only 34 pages, and was originally included with Gamemaster Law. The book conveys a sense of a tutorial: it has wide right margins with developer notes and space for a GM to add their own. There are many explanatory sections on how to use the material, handle NPC’s and encounters. As a section of Gamemaster Law that approach makes sense, but it feels a bit clunky as the stand-alone module.

Cover Art. First off, the cover art: it didn’t have the punch that Brian White’s Iron Wind cover had, and certainly it was no Gail McIntosh cover on Cloudlords of Tanara. But I like it now, for it’s color and realism. There is a ruined castle, an imposing black figure astride a horse and in the forefront, the gentle Vorig Kye releasing a small bird. Ha! He was cool when I first read Vog Mur but now that he has been promoted to a full Dragon Lord in Shadow World it’s much more interesting to look back and see his humble beginnings.

The Setting.  The world of “Vog Mur” (which means Death Watch) is comprised of 3 small islands: Dalov Perll, Ordye Throg and Dalla Veurd, all basically volcanic atolls situated to the north of Emer. Dalov is 14×11 miles, Ordye is 7×6 miles and Dalla 2.5×2 miles so these are small sand boxes to control player travel and maintain the adventure narrative. Again, as a introductory setting for a new GM this is a very manageable theater. Interestingly, there is no mention of Essence Flows, Navigators or Loremasters. So while this came out after Iron Wind and supposedly part of the cohesive framework, the “Loremaster Series” it seems to lie outside that framework. I’d be interested in more background on the genesis of Vog Mur. (Terry, are you reading this)?

Content and Organization. One of the frustrating aspects to Vog Mur is how information is delivered and organized.  Adding to the confusion are the naming styles: Ordye Throg, Dalla Veurd, Puirl Buirn, Oevaag Baas, Geleb Daart and Usiva Krem (and a ton of other 2 word names) don’t roll off the tongue!!!!

Inhabitants. Again, there is more confusion on how information is organized and transmitted. For example, Section 4.21 Plants has more material on geography, drops a hint about the haunted Mausoleum of Gart, then covers wolf packs, Ghouls and the Throk-Vurd. Those all should be in the other section on animals and monsters. Then, the next section 4.22 Wild Beasts and Monsters covers some other creatures that weren’t described in the Plants section. While these islands are very small, they have a very D&D like ecology. “Monsters” include intelligent baboons, a Hydra guarded and tended to by a Giant, a large squid, Firehounds, Ghouls, Trolls and even Sea Krals. (weren’t Sea Krals in Quellbourne as well?) Then you have a fisherfolk village, pirates, Half- Elven lords, and cliff dweller tribes.

Elor Once Dark. Like the Iron Wind, Vog Mur uses the writings of Elor Once Dark to transmit information and history. Here it feels very “Middle Earth”, for example:

The new King, Lembalas, married a woman of mortal blood, one Janella, who bore him two children — a boy named Tereborn and a girl called Eledrial.

Places. Vog Mur has some great maps/layouts that make for great adventuring on the islands or as drop-ins to your campaign or adventure:

Purll Cibur. This is a small town of 60 stone dwellings overlooking the cove. A few merchants and similar are described and then there are some “activities” which include brawling in the Inn & Combat contests of hand-to-hand, archery and jousting!

Encla Turic. Next we have the fortress of Encla Turic. This is a great small castle keep with mechanical functions, water tunnels, and a great library. This is the great tradition of these books and probably done by Peter and Terry. A great drop-in layout for your adventure.

The Mausoleum Gart. A old school tomb with 3 entrances that are a great dungoen crawl. Beware the undead inhabitants! Like Encla Turic, this is classic Amthor/Fenlon design and layout key with cool features, traps and treasures.

Vorig’s Manor. A simple building where the Dragonlord lives.

Last bits of stuff. At the back there is a Muri-Elven dictionary and a couple of colored maps. A simple, crudely drawn elevation style map and then on the back cover what is clearly a better version done by Fenlon with clearly marked locations of key spots.

Final thoughts. While I had to read through several sections to make sense of everything, it’s a fun little module. The islands have varied topography, there are ample places to explore and it’s small enough to control the action and give the party some “wins” without being overwhelmed with a larger world. Clearly, the module could use with a redesign and re-organization to present the material better, and maybe, just maybe, tone down or simplify some of the place names. The creatures feel very OSR and Sea Krals were never canonized by Terry, but it would easy to replace them with another race.

There has been some retro-modding to Vog Mur in later Shadow World material:

Renia Athos, Titanium Golem.  Under Nontataku in a cave

3. Dulcaborn and his 101 knights are integrated into the master timeline.

The World of Vog Mur is clearly an entry level module with it’s smaller size and scope might be a good candidate for a RMU makeover as the first introductory module.