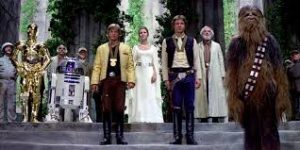 So I needed to take a small break from my 2000 word blog posts, so I thought I would write some quick thoughts on campaign endings.

As a GM it’s important that a campaign, or extended adventure series end satisfactorily. From a design standpoint, some of that can be charted through a multiple act structure, but the open ended nature of gaming (and RM dice!) means that things can go astray. It can be frustrating to have the final act end with the players feeling dissatisfied, the conclusion anti-climactic or the challenge easily met.

On the other hand, it would also be too easy to manipulate dice, events and other factors to force a cinematic ending to a long game session or campaign. Acting completely neutral means that hours of hard work managing a well designed narrative could “end with a whimper”. Uhh…”So that’s it?” the players ask. That can feel very deflating for the GM.

I’ve had both in my years of gaming–some incredible finales and some now real duds. Now, spending much of time writing game hooks, modules and adventures I’m exploring the mechanics behind these conclusions. This has become critical in my “Legends of Shadow World” tourney module. At 50th lvl things better be pretty epic!!!!

But looking at those above, I can’t help but think they are not unlike the same questions for lower level characters.

The mere fact that it’s the “end” creates new problems the GM has to anticipate. What has been your experience? Is just finishing reward enough?

Here are a few blog articles (of varying usefulness) on the subject. HERE and HERE