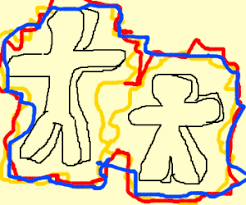 Over the past year, I’ve touched upon some new Spell Law concepts:  a different take on “Channeling“, a new way to look at “Summoning”  and the concept of “Links” or “Threads”. When I work on creating new spell lists for Rolemaster and Shadow World, I tend to come at it from a different perspective. I think many new lists featured in RoCos and the Guild Companion were devised from a Profession-centric approach. ie a new profession class is generated and then spells to support the concept are created. I’ve also done that with my Hierax Guard and a few others.

However, my more favored approach is a deconstructive process: what could magic do and how should it work? I’m often inspired by the books I’m reading–especially if it contains a novel or interesting magic system. While I’m reading I try to visualize how the books magic might work in the RM system or write a few spell lists derived from the ideas in the story. Since I read quite a bit, I average one or two lists per month that I sketch out and and drop in a review folder. I have almost 75 lists that I need to finish off, assign a “realm” or discard!!!! Out of those, probably 40 will make it into BASiL in my next iteration, pushing the spell list count to well over 200.

So what are some new mechanics for Spell Law? As an example, let’s use the “Detect” spells, specifically Detect Essence (or the other two realms for that matter). The spell allows a caster to detect the presence of Essence–not the type of spell or power or even the strength of the spell. That’s simple and still useful, right? But the spell works like a telescope–the caster can examine a 5′ radius area per round–as if they are peering through a telescope at a small concentrated area. Why does it work that way? DnD. In DnD, the ability to detect magic was critical–especially in analyzing treasure to see what, if any, objects were magical. So why can’t the spell work differently? Why can’t the caster just “see” the magical auras of objects, people, PP reservoirs, Essence Flows, Foci, active spells etc. Does that unbalance the game? Does it seem too powerful?

In Shadow World, magic is everywhere and RM already introduced the concept of spell casting color manifestations and “power perception” as a trainable skill. This lends to the idea of “auras”–magical emanations that are generated by magical fields. These auras can be seen via spells, scrying (or in the case of “High” Elves, perhaps through normal visual perception)

One of the benefits of having auras is not only can you have spells to see and perceive them, but you can have a whole other set of spells to hide, distort or change them! This creates another level of caster “dueling” where aura detection and aura masking or distortion spells conflict via RR’s, caster skill or spell skill bonuses.

Like other Spell Law list progressions, detecting and viewing magical auras improves through levels. At lower levels, the caster may just perceive the presence of magic, while later spells could perceive power level, realm, type of spell or “links” between another caster and a target they are controlling or concentrating on. This visual interpretation of spell affects provides a more cinematic approach to casting, without the general solution of casting “colors” (which I feel are a bit too “Snidely Whiplash“).

More importantly, the ability to view auras can work differently between realms–further differentiating realm powers and caster ability. One idea would be to have Essence casters access to quantatative aura detection (power, type, strength etc), while Mentalists have an easier ability to see mental connection/control/concentration between two or more people and Channelers can see “channeling auras” indicating what god a caster is associated with.

Another benefit is that it creates a unified structure for detection and analytics for all types of magic. Right now, Spell Law is a hodge podge of mechanisms that often require GM arbitration. For me this is the key to Spell Law deconstruction/reconstruction. Viewing RM magic through an unbiased lense, questioning built in DnD tropes and then rethinking accepted spell mechanics can lead to clearer, more flexible and interesting Spell Law.