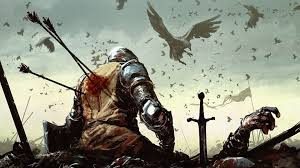 I recently read this blog and it got me thinking about the standard adventure and campaign progression. It also immediately brought to mind this scene and quote from an Indiana Jones movie.

Single adventures usually follow a linear narrative that provide a final challenge or battle that the players want to, and should win. But what about longer campaigns? Is it a series of wins, each providing experience and levelling up or is it a campaign of fits and starts? Can the players and groups lose at the end of a chapter? How about at the end of the novel? Gaming should be both fun and rewarding and few GM’s want to end a long running campaign with failure but significant set backs and even tragic losses during the campaign will make the eventual triumph that much sweeter.

An early blog I wrote was on “Newmans“–long running adversaries for the PC’s. If these adversaries are less enemies and more competitors it’s natural that they should succeed as well. But what about the opponent of “ultimate evil” or “mob boss”–should they put some points on the scoreboard or get a major win?

Of course a GM may want to build some early losses into an extended campaign–but those are intentional and meant to control the narrative. What about unpredictable losses? In RM the critical system and open ended rolls works both ways. Short of TPK, can a GM turn a unexpected tragic encounter into a positive for the campaign? Of course: most fantasy RPG’s have some form of resurrection, Rolemaster has healing spells for almost every unimaginable injury and equipment and items can be replaced eventually.

Anyone have thoughts? Have you turned a catastrophe into something better?

7 thoughts on ““Let the Wookie Win”: Turning a group loss into a campaign positive.”