Welcome to my 1st RM Combat Hacks post! While RMU is developing cool new combat expertise options, I thought I would introduce a few rule tweaks that we’ve used over the years. Our options don’t require adding new skills and can be used with every version of RM. I thought I’d start with a simple one that has worked well in years of playing. 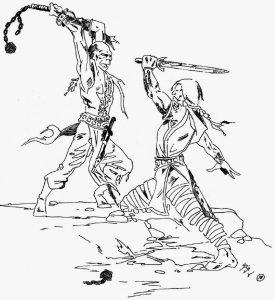 While riposte was added as a secondary skill in RM2 the rules allowed for a combatant to Full Parry and still be allowed to make a +0 attack. Enhanced Riposte allows the combatant to Full Parry and make an attack, but if the attacker misses, the defender is allowed to make an attack with a bonus equal to the attackers result and the minimum number needed for a critical result. The attacker cannot use any allocated parrying DB against the Riposte.

Ex. Taor a 3rd lvl Bard is in combat with a 5th lvl Evil Paladin. Feeling that he is over-matched, he elects to Full Parry in the hopes that his friends will show up and save his bacon. He allocates all +28 of his OB to Full Parry along with his +10 DB. The Evil Paladin attacks with +75 Longsword. He rolls a 14 for a total of 89 less Taor’s 38 Parry/DB for a final result of 51. The Paladin needed an 87 to generate a crit result on Taor. Taor does take 4 pts of damage but can now make an attack at +36!

Note that if the Paladin had generated a critical result, Taor would still be able to make the normal +0 attack per the Full Parry rules.

As this example shows, it’s possible to generate a Riposte attack bonus HIGHER than the combatant’s actual OB. This reflects the mechanism of the riposte—drawing the attacker in and even taking slight damage to create an attack opening from an over-extended opponent. Obviously, a GM can limit the Riposte bonus to the combatants OB.

For lower level players this gives them an additional tool against a superior opponent and if the attacker rolls very poorly, could give the PC a considerable Riposte bonus.