My players have been working their way through the Doom of Daggerdale module. This was one of the things I have converted over to Rolemaster. Not only did I have to convert Hook Horrors and the Nightshade/Wood Wose creatures but there are three significant NPCs in Daggerdale. These are Randle Morn, Caldoran The Razor and Tren Hoemfor. 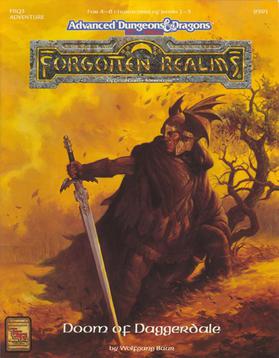 The first that the Players meet is Randle Morn the displaced Constable of Daggerfalls, the traditional ruler of the town and Dagerdale. According to the module Randle is a 7th level fighters/6th level thief. In my conversion I have made him a 10th level Rogue. This gives him the strength in combat as well as the breadth of skills. You can use the standard generic NPCs for him and just give him +5 Chain mail (AT14), +10 full shield (+35/+25), a +5 long sword and a +10 long bow. In my world these are all superior quality non-magical weapons. I chose to give him the leadership and public speaking skills required to inspire a band of 200 men to continue to fight a partisan war against the Black Network.

Tren Hoemfor is a D&D 7th level fighter. This translates into a Rolemaster 10th level fighter with Chain (AT13), a +10 broad sword and two interesting magic items.

The first is a Cloak of Displacement. I have made this a Daily Item that casts Displacement I once per day (5th level Guises, Illusionist Base). I made this decision because I did not want to introduce a magical item into the game that I would regret if it fell into the players hands!

The second item is a Ring of the Ram. This ring in D&D does 1, 2 or 3d6 damage in the form of a ramming attack depending on how many charges are used. My version is again a daily item embedded with Vacuum I (3rd level Gas Destruction, Sorcerer Base) three times a day this  delivers a single impact critical severity B. I thnk the damage it delivers is slightly less than the D&D version but it does not have a limited number of charges so on balance I think it is on a par.

The third and final NPC is Caldoran the Razor. I am not going to give you his complete stats but a general outline. In D&D he is a 6th level Mage. I have made him a 10th level human Archmage. The interesting thing about archmages is that they can pick their ten base lists from any profession and any realm. I this case I chose the Alchemist list Liquid Gas Skills that enables him to create potions. The eaty of this list is that it allows him to create potions. I have then given him a substantial stock of potions from his own spells (1st to 3rd level and those of his allies. What I have aimed for is to massively extend his pool of powerpoints and therefore how dangerous a foe he is without having to resort to giving him powerful magic items. Potions are inherently single use and in someways force players into making choices. If they use the potion now then it is gone or save it until they really need it. As it is they have no way of telling what any of these potions do without testing them the most basic way of holding your nose and swallowing it down.

I am a big fan of low level spells. I think there are some really cool powers in there that often get over looked by bigger and more powerful spells. Another option is of course you can give potions to somebody else and there is no skill involved in use it. In Rolemaster you need a certain skill to invoke a rune or scroll. Potions are just glug it down and hope for the best!

As it is Calderan is still alive and kicking and a danger to the PCs so I cannot go into much more detail. Once he is done for I will share what his stock of potions was and how he used them.