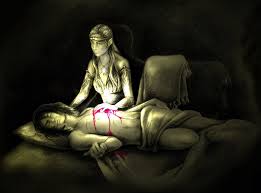 Our rewrite of Spell Law was always going to be a work in progress: every new idea, every game session of playtesting or a random thought makes us rethink our basic assumptions. So a recent comment on the Rolemaster Forums  and various blogs on the RolemasterBlog has me thinking about “Realms” again.

Peter makes the argument against the Channeling Realm and his solution rolls various Channeling spells into either the Essence or Mentalism realms. I think my discussions of BASiL realms can be misleading—I don’t see “Realms” as separate properties of power; instead we see “Realms” as the separation of magical powers by casting mechanisms. In RMU this is the same distinction between generating magic effects via spells versus magical effects via rituals. We just take it one step further and further divide spell casting into more distinct mechanisms. This just happens to mirror the original Essence, Channeling, Mentalism to some degree, but we added 4-5 other “Realms” so the comparison starts to lessen. (I just haven’t gotten around to put up these other Realms yet). Peter refers to this as Schools of Magic which I think is a pretty good model to view it.

I think RMU and RM in general has it wrong to use the same spellcasting mechanism for all three realms (SCR, 1-3 round casting time .etc). Furthermore it’s clear that some spell lists just don’t fit the assigned realm or that casting process. We attempted to correct that in BASiL and just took the process where it led us. That meant that “Imbedding/Alchemist” magic needed a better casting and process methodology; “performance magic” (bard, dance, sing etc) needed a more unique process and “written” magic (runes/sigils/glyphs/symbols/circles) didn’t really fit into a 1-3 round casting time.

I’ve blogged about increasing distinctions between Realm powers, but in my thinking over these latest posts and blogs I think I made a mistake—one that I write about often. It’s difficult to completely remove all the tropes/memes and biases built up over a lifetime of gaming and I question my thinking all the time when writing new material, but I stuck to a trope I should have reconsidered. Why shouldn’t the Essence realm have healing spells?

In BASiL I made a clear distinction between Essence (manipulation of the physical world) and Channeling (miraculous and affecting spiritual issues): sort of Science versus Faith paradigm. So while it was clear to me that Spirit Mastery, Souls, etc were solidly in the realm of the metaphysical, I kept healing in the Channeling realm (and self-healing in the mentalism). I do remember questioning this during the Spell Law redesign but I kept healing in Channeling for “balance” purposes!!! My hypocrisy.

Spells that heal tissue, stop bleeding or knit tissue and muscle are very much a physical process and should be included in Essence. At the same time the healing spells in Channeling should be less technical and more miraculous—or just more effective—given their source to divinity. So it looks like I’m moving the Healing Law lists to Essence and writing new and improved healing spells for Channeling.

For more thoughts on the Spell Law rewrite: