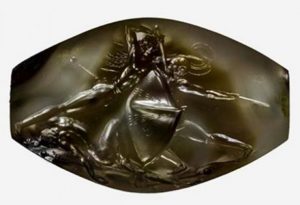 First off, let’s discuss the picture above. If you follow archaeology you might recognize this artwork: it’s actually an etching, a detailed picture carved on a 1.6″ agate gemstone found in a Minoan tomb. Here is an enlarged drawing showing details, some of them only 1/2 a millimeter: 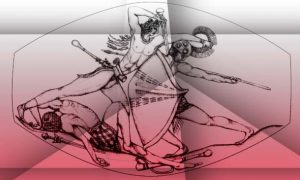 Pretty incredible and is right up there with the Antikytherea device and the Lycergus Cup.

What else do we have for Sunday..how about some spell lists and a revised version of The Seers of Strok. I posted these over at RM Forums, but again, that site requires a user account to not only download but to even SEE a file that could be downloaded. I’ve had a few people tell me they had no idea how many SW files were on the THREAD until they created an account. So I also put them up here on the blog which doesn’t require a user account.

First, we have 4 new spell lists.

“Simple Embedding”. This utility list is meant to create 1 use magic items like candles, powders, salves, unguents, charms, potions etc. These are items that are activated by consuming, breaking or applying and are destroyed. We use a set of alchemy rules for actually making the underlying object, liquid, powder (we call them substrates), but isn’t necessary to use this spell list. It’s a great list to punch up the party’s abilities w/o permanent magic items and the cost of creating the substrates keeps it from being abused.

“Talisman”. I always liked the idea of casters having a personal magic item that they “invest” and it grows in power as they do. RM introduced this with the Druid Staff and I think there is a Mage Staff list floating around as well. This was an example of a need to consolidate the idea–just make one list that can be used by casters. The flavor and type of powers invested into the object would naturally differentiate the mage from the druid or warlock. I require the caster invests Co. points into the object, but some people have told me that seems to harsh. If you don’t like it, change it!

“Weapon Runes”. Weapon Runes was a great concept in RoCo 1 but some of the functionality was poor and the list needed some work (in my opinion anyway).  Weapon Runes are one-time magical inscriptions that can be put on a weapon or object that activate when a certain condition is met–like a hit or critical result. Like the “Simple Embed” items above, it’s a good way to add offensive ability to the group without getting overpowered. The Runes can be seen if you look closely–they manifest as a faint glimmer–and can be deciphered using Rune skill. I’ve played around with various durations they can stay latent, and right now I use 24 hours. I originally had them last until they were used, but found players layering Weapon Runes on items between adventures when PP’s didn’t matter. I use a “Item Roll” to see if the object/weapon will accept the Rune. Basically, it’s the object item strength vs the combined levels of Runes–both the one being cast and any Runes already on the object. If it fails by more than 50 all the existing Runes are lost as well. Objects with high strengths: laen, eog, etc can accept and hold a ton of Weapon Runes, while fragile or inferior items aren’t going to accept them well.

“Protection Runes”. Like Weapon Runes but for armor, shields or any appropriate object. In fact could be tied into a simple object like a necklace that will activate when a trigger is encountered.

Lastly, we have the newest version of the Seers of Strok, the 1st Chapter of 5 in my 50th level adventure.

And..the pre-gen stats for an all Cleric group to run through Legends