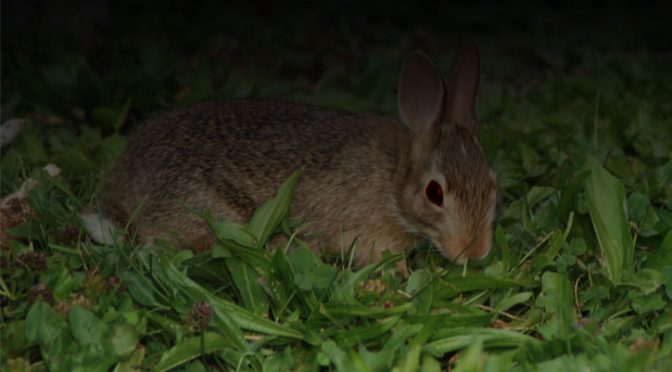 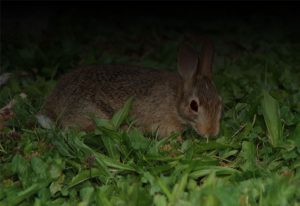 The vampire bunny is a monster that appears in the Rolemaster Creatures & Treasures supplement, which is available as a PDF and print on demand book from RPGNow in the updated version, Rolemaster Classic: Creatures & Treasures, or as the original print edition from Amazon. This creature is not described in the Vampires section of the original book, and only its stats are listed.

Here is an ecology article on the vampire bunny, presented in the manner of the original ones found in older issues of Dragon Magazine.

The following is from a lecture given by the visiting Laan lecturer, the noted Blais Rongen, at the University of Kalingen in Sel-kai, in the year 6021 TEI.

“To this day it is not known for certain how the creature given the incongruously cute name ‘vampire bunny’ came about. Whether this creation was an accident or deliberate, or a combination of both is still open for debate, and there are different theories that have been put forward.

“One theory is that a vampire may have fed on a rabbit, for whatever reason – rabbits are not a vampire’s normal prey, so perhaps the creature was starving or otherwise desperate, or maybe it was just experimenting with new types of food, as a human or other intelligent being would.

“It is proposed that, for some reason, this feeding caused an unusual reaction in the rabbit – perhaps the vampiric disease combined with another disease which the rabbit was suffering from – and resulted in the first vampire bunny being created.

“Another theory is that the vampire bunny was a deliberate creation, whether this was done by a vampire or by a necromancer, or one who was both, who deliberately experimented on rabbits to create one that was vampiric in nature, using vampiric blood, magic, feeding or a combination to create a new type of vampire.

“Whatever the original origin, the vampiric strain has since been spread amongst the rabbit population at large, as the vampire bunny is capable of spreading vampirism.

“Rabbits are normally social animals that can be found in large groups. The vampire bunny is, by comparison, a solitary creature, although it will normally be found at least reasonably close to a rabbit warren, for the rabbit is the vampiric type’s normal prey. Two vampire bunnies in the same hunting region will attack each other, until one is either driven off or killed.

“The vampire bunny suffers the usual weaknesses of other vampires, and avoids sunlight and running water, resting underground during daylight hours. The vampiric rabbit also has many of the advantages of a normal vampire, too, which is what makes it dangerous. To harm a vampire bunny requires weapons that are silver, magical or wooden, such as the archetypal stake. They are also vulnerable to water and electrical spells.

“Just as there are different breeds of rabbits, there are different breeds of vampire bunnies. This difference would appear to be purely cosmetic, reflecting the appearance the rabbit had in life, as the vampires are willing to feed on, and able to convert, other breeds of rabbits, there are no reports of creatures other than rabbits being turned into vampires by the bit of a vampire bunny, nor do they seem to feed on other creatures, instead simply killing them.

“The differences between a vampire bunny and a normal rabbit are quite subtle and not immediately obvious. The rabbit’s incisors, which are already quite long, become much more pointed with the transformation. The hair colour of the rabbit also seems to alter, becoming paler. Some witnesses have claimed that a vampire bunny’s eyes “glow” in the dark, but this may simply be the normal reflection seen in an animal’s eyes when a light is hone in them which has been misinterpreted by the witnesses. Rabbits are normally active at dawn and dusk; the vampire bunny is completely nocturnal. The primary difference is, of course, that the rabbit no longer feeds on vegetation, but on living beings.

“The vampiric rabbit is more intelligent, or at least more cunning, than a normal rabbit, but it cannot change shape or transform into a cloud of mist, nor can it cast spells. One suggestion posits that the reason a vampire bunny lacks these normal vampiric abilities is that their intelligence is not raised enough to be able to use further abilities, and there is a theory that, if imbued with human intelligence, a vampire bunny would gain these abilities. Fortunately, no one has been foolish enough to attempt this as yet.

“The vampire bunny is a lot more dangerous than it sounds from its almost-cute name. Predators who normally feed on rabbits have had a nasty surprise when they tried to feed on the vampire bunny, and they are dangerous to larger creatures too, especially as the typical predator lacks the means to actually damage the rabbit. Warrens of rabbits that have a vampire bunny residing near and feeding off them tend to be larger than normal, as the vampire will not tolerate other predators hunting its food source, and will kill them when they are discovered, luring the predator in by pretending to be a normal rabbit, and then attacking.

“The vampire bunny is much faster than a normal rabbit, making it easily able to hunt them. It employs its bite as its primary attack, but it will also butt other creatures, especially those larger than it, often doing so in an attempt to knock them off their feet and thereby make them much more vulnerable to a bite attack. This butt has been known to knock full-grown men off their feet, in no small part due to the surprise incurred by being attacked by a rabbit.

“The vampire bunny does not generally seek out people to kill, unlike its larger kin, because it feeds off its own kind. However, any that blunder into its hunting range are in definite danger, a danger that is increased by it coming from what initially appears to be a small, defenceless prey animal. In conclusion, the vampire bunny’s lethality should not be underestimated; this creature is hard to kill, and impossible to harm for those lacking suitable equipment.”