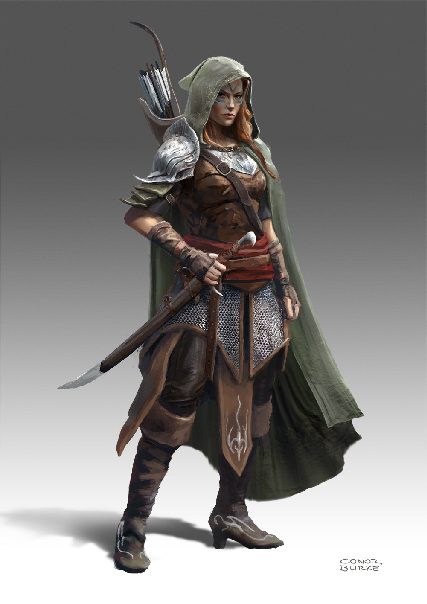 The following lists are my solution to what I feel is one of the weaknesses of the Ranger class in Rolemaster: a lack of combat spells. You can access them in our Downloads: RMU section, above.

The Ranger has some good utility spells, but imho it has always lacked some combat oomph. These two lists give a lot of oomph. Too much? let me know what you think.

Each of these two lists allows the Ranger to create a personal ‘Wyrd weapon’ (ranged or melee), a magical bow, blade, or other weapon attuned specifically to him or her (or it). They then use that bow or blade to buff their own attacks, striking more intuitively with it (Intuitive Strike), using special arrows with it (Elemental Arrow), having it change shape to grow spikes, etc.

The concept of a ‘Wyrd Bow’ originated I believe with James W. Canavan Jr., who published the list of that name in the Guild Companion in 2000 ( http://www.guildcompanion.com/scrolls/2000/jun/wyrdbow.html ). I have adapted that list to RMU, and also used it as the basis of my ‘Wyrd Blade’ list that extends the favor to the melee Ranger.

Note that the intent is that a Ranger character will only take one of these two lists, picking between being primarily a ranged or primarily a melee character (yes, the shadow of Drizzt is long!). A character can only have one Wyrd blade at any given time, so developing both lists would not be very practical or effective.

These are rough drafts, so please let me know what you think.