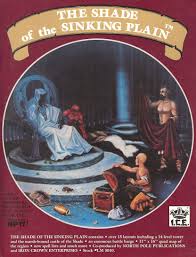 We are at the last chapter of my reviews of the original Loremaster module series. I wish I could say I saved the best for last; but that’s not really the case. While Shade of the Sinking Plain has occupied a place of curiosity, appeal and mystery for decades, it’s not that great. Basically a D&D module re-purposed for Rolemaster.

Despite it’s arguable quality, it’s generally seen as a “rare” book, at times on par or even more than the price of The Court of Ardor. SotSP can fetch hundreds of dollars or more in excellent condition. But has anyone read it or even used it in an adventure? A quick but not exhaustive search via google and I couldn’t find a single review of the Shade of the Sinking Plain!

First off, SotSP is a “Loremaster Adventure from North Pole Publications, Inc.” and prominently says so on the cover and ToC.  Interestingly, North Pole Publications did at least two other products: The Serpent Islands and Tome of Mighty Magic and there may be MORE. I don’t have time to hunt them down, but it would be interesting to find out more on the company. The credits can be found in the back. Apparently the author was Roger Walker with development credits to Terry, Douglas Bohlman and Rober Walker.  The remainder of the credits for art, production, editing and play testing seems a mix of North Pole and ICE.

The cover art quality is average but the scene itself is compelling.  A robed figure sits on his throne while slaves or pirates present treasure and booty. Skulking behind the throne is a Demon of some sort. The art appears to be done by Victoria Wheeler in 1983. The back side of the 1 piece cover is a large hex map of the “Northern Kingdoms” (which is Trademarked apparently). It’s a fairly simple map with only major geographic features, the location of the Shade’s keep, a few cities and that’s about it. Pretty sparse and in no way the quality of the Iron Wind or Cloudlords. (or Vog Mur for that matter). Again, we get the sense that this is an outlier. More Judges Guild for D&D than a curated ICE/RM product from Terry, Pete and crew.

The ToC looks like an attempt to bend the modules material into the standard Loremaster organization: section 1 is on the world of Loremaster, 2 is a general overview, 3 is Politics and Power, 4 is a physical overview, 5 is people of note, 6 is layouts, 7 is a gamemaster guide and 8 is scenarios/adventures. I’ll get more into the actual content, but it feels like there was a half-hearted attempt to “Loremasterize” some of the material by North Pole.

Material starts at page 2 and the font type immediately feels like Judges Guild or Midkemia Press than an ICE product with a smaller more distinct font. There is 1 page of the standard “world of loremaster” copy and then some definitions/glossary with RPG terms and historical people and items. Page 5 has a short general overview: basically the land of the Sinking Plain is an enormous marsh. That’s it in a nutshelf. A paragraph on inhabitants: the only humanoids are Trolls. The cities are mostly Common Man. The woods have Elves. The foothills have Goblins, Orcs and Dwarves. This is all very generic.

This section is an overview of the three cities: Zetta, Garrothold and Oriz, but the majority of the section focuses on Oriz. Why it’s called “Politics and Power” is beyond me. Zetta and Garrothold only have the briefest of material so the GM will have to fill in a lot of information for the cities to be useful in the game. Oriz gets a small hand drawn map (see above), lengthier material on different city districts, a rumor chart and some notes on the monetary system.  Strangely, each of the 8 districts are covered twice, first as descriptions and then again under a sub-category “Economy”.  Overall there is 5-6 pages covering the 3 cities and it’s sparse. The last section is a Vignette–a short first person narrative used to introduce the Shade. I’m curious whether this was written by Terry or an ICE staff member as the quality of the writing is much better than the rest of the module.

This section is short and a bit puzzling. First there is the crappy map you see above–my drawings are pretty bad, but that one looks like it took all of  minutes to draw. Unlike the other Loremaster/MERP and SW books which feature excellent maps, Shade just doesn’t keep up. Then there is a short section that describes the Shade’s keep and his Bronze Barge.  The barge is very cool, but this material should have just been inserted in the later “Layout” section. Finally there are some encounter tables that don’t work well inserted into the page layout–they should have been structured as actual tables in the back. Again, the organization of this module is poor and really breaks up the flow of information.

This is really the “Politics and Power” section as it covers the key NPC’s and there history. This is the core of most ICE modules as it provides an overview of the dynamics and backgrounds of the key people. This section is a bit more comprehensive (punched up by Terry or ICE?), and covers the “Shade”, Aaron the pirate captain, Prince Arndre W’ricke ruler of Zetta, Danel Silens an advisor, King Y’rage, Smiley a war lord, and finally Lito Extempler prelate of the truth. Most of the section is spent on the Shade, as it’s the key NPC opponent for the players.

Section 6 covers the layouts of the key locations. First is the Shade’s keep:

It’s basic but serviceable. Then there are some detailed drawings of the portcullis winch system and piping used to disperse a variety of fluids: oil, acid, paralysis and “moron oil”. These oils are keps in cauldrons that run along ceiling tracks. Compared to the rest of the module, this is very specific and detailed and feels like Terry or Pete had a hand in this.

The next layout is the Shade’s tower:

This is a great layout and the layout key was definitely written by Terry or ICE. There are great traps, descriptive text and there are 14 levels in the tower. The Shade’s tower layout is really the best part of the module and a great drop-in to any campaign. In fact, it would be a great fortress for Roth Naku, the Lich that resides in the Thanor Stand (p. 68 Emer II).

The next layout is the Shade’s bronze battle barge.

The barge is huge, with multi story battle towers, rams, catapults and driven by an Elemental Engine. Very cool so far, but here is the kicker for me: the 380′ barge can be reduced to toy size and put in a storage bottle due to a spell “Boat in a Bottle”. I was never a fan of shrinking castles and ships and it doesn’t feel very Rolemaster.

Section 7.0 is a mixture of material. The first part covers the “adventure phases”–basically the writer sees this module as a linear adventure rather than a sandbox setting like the other Loremaster books. It’s a short story in 4 parts: gather info, travel to the keep, the battle, return and collect reward. The next part introduced new magic items. There are a few good ones included but one in particular is like the barge: it’s a marble cube that transform into a 13 level fortress including forming a hill as it’s base.  Again, I’m not keen on the concept; it seems more whimsical magic than the more grounded magic found in Rolemaster. After the magic items, we have a number of new creatures: some Demonic creatures, some hybrids, snakes and giant spiders. Nothing to revolutionary or creative. Next are new spells. This IS interesting as North Pole Publications also did a Tome of Mighty Magic. Listed are individual spells that name lists and level so they can be incorporated into existing Spell Law lists. Many of the spells are more suited to d20 games but there are few goods ones:

Alaup’s Zufferooma. I’m not a fan of “named” spells, but this one is pretty funny. It creates an almost indestructible, horrid, camel that is constantly surrounded by a sand whirlwind.

Healing Sleep. This is a good one. It basically sends the target into a deep sleep but also provides accelerated healing.

Elemental Summons. RM didn’t have any elemental summons for quite a while. The module has 6 summon and control spells that can be inserted into Gate Mastery. That’s a good add if you are using 1st edition RM.

The final section breaks down the adventure path with very specific If/When conditions.  Again, the intent here is a standard linear adventure, the the GM is coached here to keep the train on the tracks. But in this section is something interesting: a simple large scale combat system. Basically this is used for a infantry or siege battle with 30 minute phases, morale checks, archery mechanics, fortifications and charts  for Attack Conditions, Heavy Weapons, Ship Capabilities and troop training. I’m not familiar with War Law, but someone should check these rules out and see if they make sense. They only take up about a page or two and it might be a nice little mechanic for troop actions in RM.

Overall impressions and thoughts. At it’s core, Shade of the Sinking Plain is a short, basic adventure. The efforts to expand it’s scope with cities and regional maps just fall short in quality and there is so little there it’s basically meaningless anyway. However, the Shade’s keep and battle barge are cool and interesting and the NPCs can be easily fleshed out. There are some good spell ideas and that battle mechanic may be useful for a quick and dirty mechanic. Ultimately, the most useful and well done section is the Shade’s tower and that definitely has a RM/SW feel to it.

Finally, for clarification, my module The Priest King of Shade WAS meant to be a re-imagining of Shade of the Sinking Plain. I kept the best “kernels” of Shade and expanded it into a more traditional Shadow World regional module located in SW Argyra.

Thus ends my 4 part blog on the original Loremaster series! Thanks for reading.