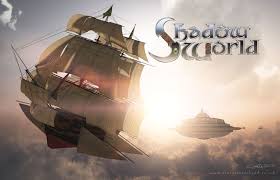 One of the great qualities of Shadow World as a game setting is the number of different “styles” that can be found in the various books. No matter what type of fantasy game you play, you can probably find a place or time in Kulthea that can work for you.

Cross-genre. SW’s sci-fi elements and tie in with Spacemaster were pretty novel for a fantasy setting in the late 80’s. For GM’s that like the “ancient astronaut” angle or want to run a Gene Wolfe style campaign, SW has a great back story and cool tech that co-exist with the more traditional fantasy elements.

Low Fantasy/Gritty. While arguably a pre-cursor to SW, The Iron Wind has a very dark feel to it. Ancient citadels, Demonic lords, icy plains and frigid waters gave the module a more mature feel than the “cartoony” D&D modules published in the early 80’s. Part of this was the artwork, but the prose was a marked difference as well. The Iron Wind is still one of my favorites with a distinctive grimdark atmosphere.

Anime. Eidolon brought a certain anime feel to SW. The sky-city, flying ships and interesting Elves evoked a more “wondrous”, lighter feel to SW than previous books. For GM’s that want to run a whimsical campaign in the spirit of Castle in the Sky, or Howls Moving Castle, Shadow World has all the right stuff!

Steampunk. Shadow World is the perfect setting for a steampunk campaign. Skyships, dirgibles, leather clad Navigators, the Elves of Namar-tol all have a great retro- tech feel. GM’s that want to run a  Butcher style campaign can easily create adventures in Shadow World.

Horror. Emer, the Great Continent and the Atlas addendum brought a darker feel to SW. The Jerak Ahenrath, Aogthu, the Soulstone and the Ark of the Worlds is reminiscent of the Cthulhu mythos. Want to terrify your players—introduce them to Shards or a Herald of the Night!

Hyborian Age. The Interregnum, covering over 100,000 years is a great time to run Conan/Hyborian style adventures. Powerful Dragons, Earthwardens, scattered Elven empires and the ruins of the 1st Era. Perfect!

This is just a few ideas–what style of campaign have you run in Shadow World?

5 thoughts on “The Many Flavors of Shadow World”