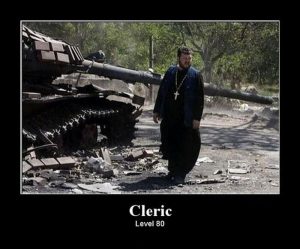 In last weeks BLOG POST, I discussed issues I had with high level Essence spells; specifically combat oriented spells from the Open and Closed List. These posts are a result of the intersection of two projects: BASil (my rewrite of spell law) and 5 of 50 (50th lvl adventure series). This puts me in a position of familiarity with spell law and  creating and testing high level adventures.

It’s been a few years since my first iteration of BASiL, and I haven’t bothered reviewing my notes and analysis in quite some time. Instead I’m looking at RM spells from this new perspective: how useful and powerful are they for very high level adventuring. Today I want to offer my thoughts on the Channeling realm. Again, just focusing on combat oriented lists and just the Open and Closed.

Barrier Law. I’m not sure that much of Barrier Law is Channeling appropriate–seems more elemental. This also goes to a Gods “aspect” and what type of powers a cleric would have. Should a Cleric of the God of Fire be able to cast Ice Wall? Anyway, let’s just talk about “Wall of Force”–the 50th lvl spell. It creates an impassable barrier of energy…but…it’s only 10′ x 20′, lasts up to 1 rnd/lvl and the Cleric must concentrate! This feels more like a 25th or 30th lvl spell with a better version at 50th lvl. Maybe no concentrations and AoE scaled to level?

Concussions Way. Here is a good example of a great high level spell, but a awkward power progression. 30th lvl provides “True Healing” which heals 1 target of all their hits, but the cleric must be touching the target. Then the next spell (50th lvl), Mass True Healing, does the same but for 1 targetlvl (50 targets!) and they can be up to 100′ away. That’s a fantastic spell, but seems quite a bit more potent than the next highest? On a  side note the 25th lvl spell “Regeneration” is a missed opportunity. It should heal 5 hits/rnd, last 1 rnd/lvl and not require concentration.

Calm Spirits. Not sure about this–“Calm True” has a duration of P. Does this work in the game–permanents pacifying a target?

That’s it for Channeling! I definitely think that the lack of protective or augmentation spells nerfs the profession compared to other systems. Looking at just those spells/lists, the most effective role for a Cleric is to cast Concussion Ways when needed. Spell Defense requires concentration and Wall of Force would only be needed in extreme circumstances (and require concentration.)

My Channeling BASiL lists, including all the Orhan/Charon pantheon specific lists really pumped up Clerics. In fact a group of Clerics in my SW campaign are as powerful as almost any other mixed profession group!