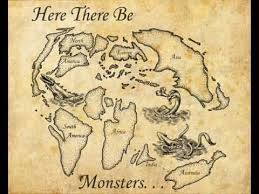 One of my favorite aspects of Shadow World is the general lack of fantasy “monsters”. Perhaps the early emphasis of the Fenlon Middle Earth campaign set the tone, but both Rolemaster and Shadow World were relatively light on the D&D style monster encounter.

As a younger player strange and unique monsters helped set the tone of wonder, mystery and even fear but as my players got older, introducing a never ending stream of monsters seemed to work the opposite by taking them out of the game.

Yes, the SW Master Atlas contains most of the entries found in C&T and some of the MA references giants, orcs, trolls, goblins but the predominance of core products (written by Terry) are humanoid centric: human and elves. This leaves encounters and combat focused on PC vs NPC and profession vs profession tactics and strategies.

The exceptions of course are the Dragons, Demons and fusion creatures. The fusion creatures: Shard, Xyr etc give SW it’s unique flavor and arguably add a horror element to the setting. These creatures seemed to have been adopted by the Numenera setting.

Compared to other traditional fantasy settings, SW seems very monster-lite. I call it the “Alien” or “Jaws” approach–having monsters that are few and far between leverage their impact on experienced players.

5 thoughts on “Shadow World Revisited: “Here be NO monsters””