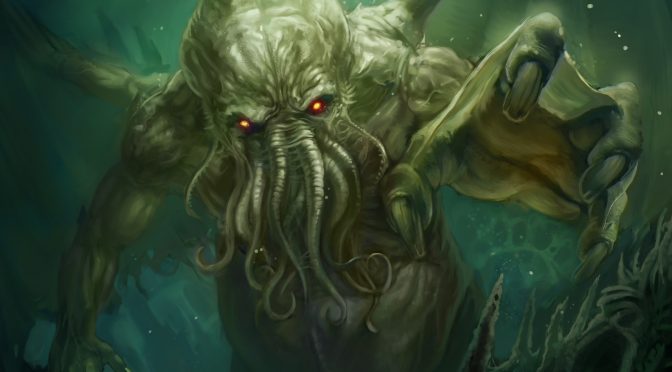 Egdcltd (Azukail Games) has kindly sent me a copy of Tomes of Cthulhu. This supplement details 40 books, journals or tomes to add colour and detail to a Cthulhu based game.

Like nearly all of Azukail Games supplements this is system neutral so if you were running a Rolemaster based Cthulhu game you could use this just as easily as alongside one of the official Cthulhu games.

Each book is steeped in details about how it was written, the author, where and how it was lost or found and they are all suggestive of adventure hooks. Not all Cthulhu is based in the 1920s so the book descriptions consider the influence of time between writing and the game setting. It looks like a lot of thought and work has gone into this supplement.

This got me thinking about Rolemaster and Cthulhu. My Cthulhu experience was all with the Chaosium game which was very much based on the RuneQuest game mechanics with a bit of insanity thrown in.

So we already have insanity, if sorts, with the Fear rules. Parapsychology was an essential skill in those games and there is no difficulty in adding a skill to rolemaster for that purpose.

Making magic unavailable to the players is not something that requires a rules change, it is simply a GM/world building choice. It was my experience that magic was slowly revealed to the characters as the story developed.

The magic itself as far as I can remember was more of the summoning and control style so putting together customised spell lists would be easy enough. Anyone who was a keeper of the secrets  (GM) would have a better understanding of the spells needed.

There is nothing here that RM cannot cope with except one thing.

The go to weapons of the 1920s and 30s were firearms. I have always felt that guns in RM and Spacemaster for that matter were disappointing. I had always used Spacemaster until I discovered 10 Million Ways to Die. Even with the add on book guns are not really any better, 20 or 30 hits plus a critical just do not make guns scary. Spacemaster 1st edition was by far the worst with a 11mm Automatic doing a maximum damage of about 15 to 20 hits against unarmed targets.

I know this is intothatdarkness’s speciality but it had never occurred to me that this is the only thing stopping people from running a perfectly capable Cthulhu game using Rolemaster rules.

I know this is a little premature but this is something that RMU (for muskets and the like) and SMU (should it ever happen) needs to address.

So I have wandered off topic a little but if you were looking to run something a little different then consider this take a copy of Don’t Let Them Take You Alive (PWYW) for the setting, Tomes of Cthulhu ($2.99) for a bit of flavour and your favourite RM/SM version with guns and have a fun night of horror and insanity.

8 thoughts on “Tomes of Cthulhu by another route”