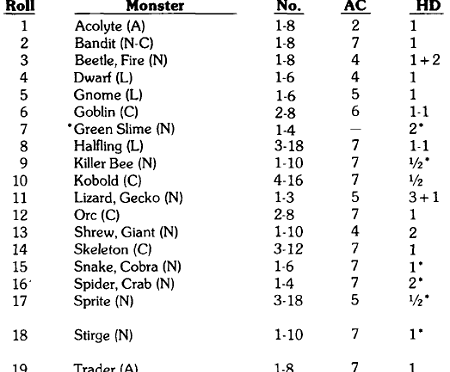 I absolutely detest D&D style wandering monster encounters. Take the title example, the problems with 2d8 zombies are almost too many to list, where did the zombies come from, who made them, why are they there? Even the 2d8 bit irks me. Against a party of PCs 2 zombies is quite possibly a bit of a non-event. 16 zombies could quite possibly be a potential TPK.

What is the point of the encounter?

If it is resource attrition, to grind the party down before they reach the end of level boss then shouldn’t it be part of the primary adventure notes? Wandering monsters or random encounters are normally in addition to the set locations and encounters.

If the random encounter tables are well constructed then I accept that as the party move from locale to locale then the sorts of encounters they have will change with the territory.

If my memory serves I seem to remember that the GM would roll 1d6 every hour or so to see if there was a random encounter. The last time I made random encounter tables I created one for each floor of a castle keep. The random encounters on the upper floor were things like servants carry laundry, children of the residents with their governess playing with marionette puppets and a nurse with a baby. In the lower floors their were more kitchen servants, off duty guards, handymen carrying out minor building repairs. The random encounters reflected the day to day life of the castle. It meant that the players could not sneak around the castle corridors with impunity. Killing these people would have consequences even if the body was not discovered, they would be missed and mostly quite quickly. Incidentally I discovered that a random encounter with six kids playing hide and seek can cause absolute havoc with a parties attempt to infiltrate a castle!

This is not intended as a rant against D&D, I am going somewhere with this…

Last week I talked about Fate points and about using a toned down version for minor skill rolls.  There is a bit of that in what comes next.

I have also talked about relative encounters, there is a bit of that in this.

So imagine you scrap random encounters completely. We keep the encounters but we get rid of the random bit. What would be nice would be a non random way of getting unexpected encounters.

The only problem with this graduated levels of success is that starting characters have very little chance of ever succeeding at anything that isn’t an absolute core skill. In RMC you pretty much need an open ended roll do anything.

As a GM you cannot use any difficulty ratings beyond ‘normal’ or the party will probably hit a brick wall of an unopenable door or unfindable clue.

So imagine that as a GM we count Partial Successes as Success but you also keep a tally of each ‘bump up’. You then fix a break point for each location. If your tally of bumps equals the break point you trigger an encounter.

So for example you put a break point of 3 against the scene set in a bandit camp. The players are trying to sneak in to the camp, trying to spot any guards one player gets a partial success, you elevate this to success but keep a score of 1. The players make their plan and then try and sneak in, rolling their stalking skill. The mage gets a partial success making the tally now 2. The players approach a corral of horses and the ranger tries to use animal handling to calm the horses and gets another partial. The tally is now 3 and the break point is reached. As GM you can toss in an extra encounter (A groom checking on the horses?) and reset the tally back to zero.

What we are doing is making the characters more competent as we count partial successes as successes but balancing the books by throwing more complications at the party.

More heavily patrolled or traffic areas would have a lower break point value as people are more likely to maybe sense the slight feeling of something being not quite right or maybe the characters have left a clue or evidence of their activities.

This can work in any situation, if the party are moving around a souk trying to haggle over prices then a handful of partial successes may be enough to have marked them out as non-locals by a street gang.

If you want encounters to lead to combat, we do a lot of hack and slash so ours frequently will, then we can use relative encounters so they are always balanced to the power of the party, this gets rid of the 2d8 bit in the title.

So this idea makes characters more capable in a similar way to inspiration, removes the random element of wandering monsters and pitches the wandering monster to the power of the party. It can also give you that lovely warm glow feeling of being a really evil GM as you benevolently allow a character to succeed while at the same time knowing that there is one more tick on the ‘shit happens’ register.

8 thoughts on “You encounter 2d8 Zombies”