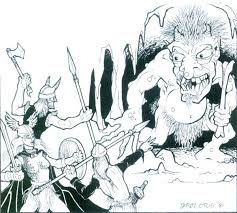 Even in the earliest editions Rolemaster Arms Law contained a detailed chart of weapons with a variety of data: mods to hit ATs, length, weight, speed, notes etc. Beyond any additional to hit bonuses we never really referred to that chart at all–but it did give hints to useful information that could be incorporated into combat.

Recently RMU expanded various “combat maneuvers” and combat situations into the rules. Some of these set penalties can be offset by the appropriate combat maneuver skill (contra skill) or are just specific penalties based on certain situations (close quarter combat). Two situational penalties did take the actual weapon into effect: subdue and close quarters, but the rest just set a base penalty. (rear attack, protect, etc). It seems obvious that this concept can be expanded much further; that each weapon or weapon type should have custom penalties based on it’s speed, reach and style. For instance, the effort to strike behind (rear attack) should be much different for a martial artist than someone wielding a 2-hand sword.  Or the penalty to protect should be lower for someone wielding a polearm than someone with a dagger.

This simple solution adds another layer to weapon complexity without any new rules, creates real differentiation between weapons for specific combat circumstances and reduces the problem of multiple weapons sharing the same attack table. An additional benefit is that if new combat situations are created or a new weapon added, it’s easy to expand the chart without any other design work (like creating a new attack chart). We’ve added these mods right on the character sheet for easy reference.

I’ve uploaded the chart in Excel for ease of editing.  At the top is a simpler version which classifies weapons into 4 categories based on weapon reach. Below are a breakout of individual weapons, and SW special weapons. (Pete, not sure I did the file upload process correctly…)