Gendael: A trading center where furs, ores, fish, meat and other staples are exchanged for exotic spices and other items from more temperate lands. The road to Mazatlak is heavily travelled.

So, what the heck is a “Pillar City”? That’s been churning around in my hind brain for years; trying to imagine what that would look like and how to design the city for a possible module. The few clues we can glean is that it’s a city, it has pillars which can shake, it’s located on a river delta:

Definition of delta: a piece of land shaped like a triangle that is formed when a river splits into smaller rivers before it flows into an ocean

The impression is lowlands, prone to seasonal flooding that require houses built on stilts like many third world areas. Like this: 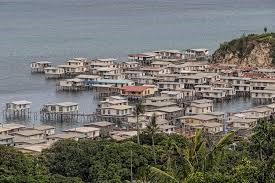 But Mazatlak isn’t a “stilt village”, it’s a “Pillar City” with stone pedestals. That makes me think of this: 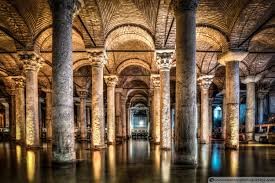 This is the famed Basilica Cistern in Constantinople. So this could be a good model of Mazatlak: a normal city with a vast foundation made up of pillars and columns. This feels right and creates a great opportunity for a dual world: the normal city above and this surreal “underneath” where trade, commerce and skullduggery could occur! This also reminds me of Chicago where they built a new street level above the first floor of the buildings and created a below ground world that mirrors the city above.

I was good with that image until I thought of something more fantastic. In my interview with Terry he mentioned his building design was more grounded in reality while Pete Fenlon designed more over the top structures. Is Mazatlak interesting enough as just a city built on a foundation of pillars? Is that too mundane and realistic? Then I imagined the city as large platforms on immense stone pillars. Sort of a Cloud City of Bespin, but with a thicker more substantial pillar as a base. The platforms would be connected via bridges and the heights of each platform would indicate status and prestige. 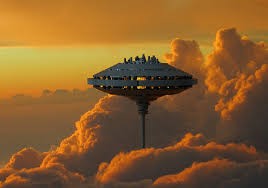 So while I’m finishing up Nontataku, thoughts of Mazatlak kept buzzing around in my head. I wish I were an artist or illustrator and could explore different concepts through drawing. Then, the other day I was reading RPG Bloggers and this came up, an illustration by Gerard Trignac:

I thought, “The Pillars ARE the City!). For Mazatlak I see the pillars being round, and much larger than this picture.

One final idea I had was that the Pillar City was actually much older, originally a Hirazi city—soaring columns with eyries on the top that was later populated by Y’nar settlers. Obviously I have several competing thoughts on this “Pillar City” that Terry hints at. Anyone have thoughts, ideas or suggestions?

2 thoughts on “Shadow World Speculation: What is the Mazatlak Pillar City?”