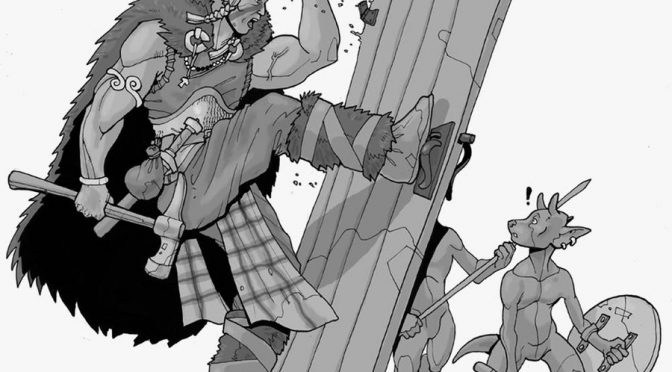 My Shadow World GM is one of the “How are you going to do that?” school. In that game I played a thief called Alfred and I was by far the most powerful character in the group. That is not egotism, it was an unfortunate fact. We were playing a high level game and we started out with pregen characters of 10th level. I have talked about this character a lot in the past so I won’t go into too much details. The GM made a mistake in the pregen character which both he and I recognised. The mistake was that in a group with only one fighter, in a very much hack and slash game, where the GM likes to put his villains in plate mail making the thiefs primary OB ‘thrown dagger’ was a serious problem. In Rolemaster it is not the hits that kill you but the criticals. If you have a character where the maximum damage they can do is 3CP and that  is from virtually point blank. Even throwing the dagger from 1′ away from your target incurs a -10 penalty on OB, at 11′ it is -20 and over 25′ it is -30. The character had a built in penalty to every single attack, extremely limited ammunition and pretty much anyone he fought could moving into melee in the next round and attack with a greater proportion of their OB than I could hit them with than I had used to attack them because of range penalties. The GM had given me AT5 with is a bit of a walking death sentence so overall beind cast as the second fighter in the group was not good for my prospects.

My solution was to immediately start developing two weapon combo and thrown dagger in the off hand. If I could only do tiny amounts of damage then I may as well try and double it up. The character was given Adrenal Move speed anyway so I could at least attempt to get 4 attacks in in the first round. If I could do 4 criticals then there was a chance I could put my foe down. Of course this was a long term solution as it was going to take many lavels to build up a new weapon skill and two weapon combo.

The GM soon realised that I was not effective in the role he had pretty much assigned me. In fact our first few combats went pretty badly. The fighter had been given 2H Sword and Frenzy and his best skills. The ranger was great with a long bow but was terrible with his shortsword. The fourth character was a magician. Our first four fights were all close quarters combats inside a tower, mostly on the stairs. Things did not go well.

The GM wanted a quick solution that was to dish out some powerful magic items. The fighter got a pair of laen broadswords and that motivated him to start investing in his secondary weapon and two weapon combo.

For me he gave a set of three uber daggers. They were +30 when thrown and hit as broadswords. At the end of the round they longdoored back to their sheaths. So all of a sudden from doing one ineffective attack each round I went to three full on broadsword attacks. I was throwing two of the daggers with my primary OB and one with my evolving off hand OB but with a useful professional bonus, plus stat, plus +30 for the weapon and just a few ranks made for an OB up in the 90s.

Within three game sessions I had totally eclipsed the fighter as the main battle tank in the group. I coordinated well with the mage and between us were were taking down the lions share of the enemy before melee even started. I had also from the very first time I spend DPs starteed to invest in a spell list. Concussion Ways was my first choice

But I was not a fighter I was a thief. It was me that scouted out the way ahead, it was me that defeated traps and opened the locks. Thieves are very much the skill using profession and they get a lot of skills very cheaply in RM2. Compared to almost everyone else I could ‘do it all’.

The GM had created this monster and in doing so he was finding it hard to challenge us. We played the game for seven years and during that time I tried to select magical items from our adventures that gave daily spell effects. So I had my own spells from just a few open channelling lists plus a handful of other spells that could be used a few times each day. Magically I was like a little low powered hybrid with maybe thirty spells to my name. Given that all my spells were 5th level to less my 50 powerpoints went quite a long way and then I gained a x2 multiplier so I pretty much had unlimited spell casting. In combat I was a death dealing gattling gun of magical daggers. The GM still used the combat phases so missile attacks, the GM included throw attacks in this phase, came before melee and movement. Out of combat I was the one with the broadest skill set.

I think the idea of ‘role playing your skills’ was introduced to try and limit my power in some respects. As I was accelerating away from the other characters in the party my skills were improving rapidly. So when I approached a lock I was throwing a +120 to +140 skill at it. Even absurdly difficult locks were 50/50 and in that situation I would use meditation that gives a +20 bonus. That pushed the odds to 70/30 in my favour. You cannot fill the world with everything being so insanely difficult that all rolls are made at -70 just to make it challenging. That was when the GM suddenly started asking me ‘How’. so when I said I wanted to check a lock for any traps he would reply with ‘How was I going to do that?’ This sort of had me on the back foot for a few minutes until I could think of a few logical methods for what I wanted to look for and how. As I am a RoleMaster player I started thinking abou this. If I am looking for any additional holes that could be exit holes for needles, for trying to feel for any weak spots or dimples on the wood that may suggest they are just a thin veneer hiding points where needles or blades may come from (just as examples) why am I not now using General Perception? If I was not a a thief profession and I asked my GM the same questions in the same situation he would probably allow me to roll perception to see if what I am looking for is discernable. No GM is ever going to say “No, you cannot roll to see if you can see that.” when the player is stood right next to the thing that they want to look at. They may not see it but that is another issue.

So if my knowledge as a player is less than a 23rd level thief is my thief’s ability limited by my lack of knowledge? Do you ask the healer exactly how they are going suture a wound? How the mage is going to cast fireball? I have never heard of anyone trying to use this roleplaying technique for anything except the stealth and subterfuge skills.

In the example of OSR role playing on the ICE forums the example given was again the poor old thief.

On another point if you are playing the thief character, you can possibly bring rangers into this as well, and you are asked “How are you going to do that?” you could quite possibly come up with a dozen suggestions. Each one you describe what you are attempting, the GM describes what you discover. You then try something else and you get the feedback on that and so on. You could quite easily ‘waste’ half the entire game session with just you trying to detect a trap on a chest when there is no trap there to be found. The rest of the party need not have even bothered to come.

I think in Rolemaster with its sophisticated skill system, particularly with the more compact meta skills that Brian and I use the OSR approach is unnecessary. It slows the game and devalues the skills. If you are only as good at Survival as the play playing the character why bother buying the skill? You would be better off just buying more ranks in General Perception as everything from tracking to detect traps to lip reading and interogation can all really be described in terms of perception rolls looking for tell tale signs.

2 thoughts on “Gaming Styles – Roll it or Role it?”