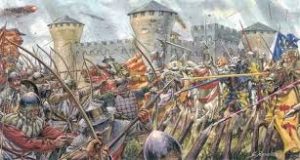 Twice now I’ve run an introductory SW adventure in Emer that injected the players into the invasion of Miir by the Katra of Stroane (c. 6041 TE). The group, along with some interesting NPC’s (Bashar the Merchant and Livian a Cleric of the Festival) are tasked with uncovering the lapse in trade and communications along the northern coast of the Sea of Votania. Ostensibly this is a war scenario but the PC’s are still acting on an individual tactical level as scouts/spies. On the second run of this adventure the PC’s actually got involved in a full scale battle; a situation I wasn’t really prepared for, nor did I handle well. Rolemaster does have War Law and there are numerous other rule sets that would have allowed for battle resolution but I don’t have any familiarity with them. (I did play Squad Leader back in the 80’s!).

RPG’s. Again, most fantasy RPG’s have designed war/mass combat rules for conflict resolution and for use with miniatures. Rules aside, as a GM with specific goals in gameplay, I see role-playing and wargaming as two distinct “stories”. The former being personal/individual while the latter is more abstract and strategic. I’m not sure they co-exist peaceably in my setting, but curious on others views.

War and Spell Law. Before Rolemaster there was the “Village of Hommlet”. Reading that module was the first time I thought about the impact of fireballs on warfare and combat. In the module is a burned out foundation of a moat house—a structure clearly destroyed by a fireball at some point. That really got me thinking about how the accepted medieval tropes we use in RPG’s are really inappropriate once magic is introduced. What use is a castle when an attacking army has a mage with Earth Law? Many of the design standards of keeps, forts and castles are really pointless once you have powerful elemental spells. Other spells like Passing make entering an enemy installation fairly easy. Once you accept that historical fortification reasoning is out the door you can embrace truly interesting architectural designs. Form becomes more important than function. Some of my favorite SW buildings are those that eschew the traditional medieval elements of moat/keep/battlements: Tharg Jironak in the Iron Wind, Jinteni cities, the Secrets, the Dragon Lord citadel etc.

Two writers of note tackled magic and war in a fantasy setting: Cook with his Black Company series and Erickson with the Malazan books. Erickson was admittedly heavily influenced by Cook but his setting was driven by an actual RPG campaign. Both treat magic as pervasive, though users vary greatly in power and abilities. Combat in both series are very evocative of WWI trench warfare; magic is mustard gas and battle is gruesome, deadly and confusing. I think the ubiquity and disposability of magic users is the key here: a single powerful magic user could easily tip the balance of an army v. army battle. More interesting is the range in between: a few magic wielders on either side. Certainly tactics would dictate that an opposing magic user would be targeted first, making them vulnerable to assassination or counter measures. These “battles within battles” might fit well into a RPG narrative—it’s really two distinct battles where the magic-users fight each other while mundane combat goes on around them.

War in the Shadow World. SW has had many battles: Wars of Dominion, invasions by Ulor, the Raven Queen wars in Gaalt. But…in a setting where basic travel may require a Navigator due to unpredictable Essaence Flows and many regions are demised by physical Essaence barriers how do you move large armies or groups of soldiers PLUS the logistical supply lines needed for war and invasion? For me it’s simple: wars and invasions are rare in SW for these very reasons. Few nations have large standing armies and conflict is smaller and more personal. This puts the emphasis on player groups and the personal narratives of role playing. Wars are more a series of skirmishes and scattered actions than large fields of battle. The large wars are historic for a reason—they are notable for their scarcity.

Do you incorporate large scale combat and battles into your gaming?