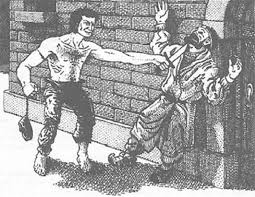 Welcome to Pt. 3 of my blog on Rolemaster Skill Consolidation. In this blog series we explore the creation of “meta-skills”—broader skills that roll up lesser or secondary skills to reduce skill bloat and better skill equality across the board. You can see Pt. 1 Channeling and Pt. 2 Survival here. Both “meta-skills” and “skills as lore” allow for PCs to act within the game rules and me to focus on the narrative flow without resorting to highly technical refereeing calls. As Pete discussed in an earlier blog, I prefer meta-skills for the balance between “rolling it” (via skill bonus) and “role-playing it” via the broad scope of meta-skills.

Today I want to focus on our meta-skill “Trickery”. I’ve played around with a number of names for this skill including “Subterfuge” and “Mummery”, but right now I’m sticking to Trickery although it lacks a certain gravitas. Our trickery skill was inspired by “The Lies of Locke Lamora”—a fantasy book about a group of thieves. The story includes great details on the thieving profession from a simple cut-purse to the skilled “long-con”. The book really inspired me to think about urban adventures, adventure narrative and mystery/detective style adventures.

The Trickery skill rolls up a number of interesting and useful secondary skills into one more comprehensive skill: pick-pockets, sleight of hand, mimicry, ventriloquism, forgery, disguise, hand-signals, and misdirection. While each of those sub-skills are cool with great potential for game play, I don’t think they stand up on their own as a primary skill. Rolling it into a meta-skill really gives it some punch and allows for creative use by the PC. Rather than having a “rule-lawyer” argument about a questionable application of the pick-pocket skill, the PCs action will fall under the broader skill subject to their skill rank and my ruling on difficulty.